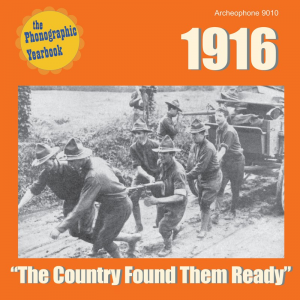 25 hits from the year that Woodrow Wilson won re-election to the U.S. presidency on the campaign, "He kept us out of war." Behind the scenes, however, Wilson was preparing the nation for entry into the conflict, which came in April 1917. At the same time, child-labor laws were passed, and Emma Goldman found herself convicted for breaking the Comstock law.