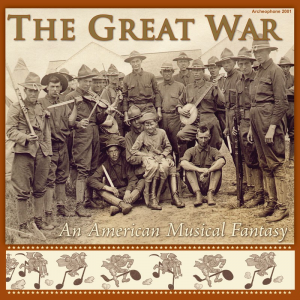 Featuring 56 tracks, Archeophone's The Great War: An American Musical Fantasy traces the history of American involvement in World War I by reviewing the kind of records that were released. What unfolds is a drama in which the U.S. transforms through a series of stages: from curious bystander and political neutral to naive dove, then from idealistic booster to jingoistic hawk, and finally from jubilant victors to street-wise questioners asking "What was it all for?" With a 76-page full-color booklet featuring historical graphics, original research on the recording industry and a personal reflection on the war, The Great War is an essential release for those who love the music of World War I.