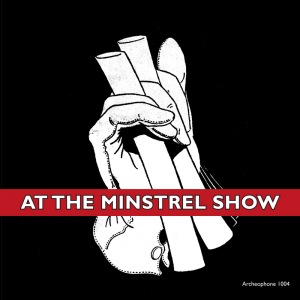 At the Minstrel Show (Various Artists)

For all the vexed issues they pose to us now, minstrel shows were an important part of American social life in the 19th and early 20th centuries. In the early days of the phonograph industry, the record labels attempted to bring the experience of minstrelsy into consumers’ homes. The records were popular; hundreds of titles and thousands of examples survive to this day.

A few of these records have been issued by modern labels, but never before has an attempt been made to deal authoritatively with the genre as a whole. At the Minstrel Show fills the void with 51 tracks on two CDs and a 56-page heavily annotated booklet by Tim Brooks, author of the new McFarland book, The Blackface Minstrel Show in Mass Media. Many of the recordings discussed in the book are featured here.

Disc One features three complete minstrel “shows”—that is, series of discs or cylinders that were intended to be listened to sequentially to give the listener the experience of a whole minstrel show. Disc Two has a number of minstrel “first part” routines (some extremely rare) and songs and skits about minstrelsy, recorded between 1894 and 1926.

Visit At the Minstrel Show's expanded catalogue page to see the complete track listing and listen to sound samples.