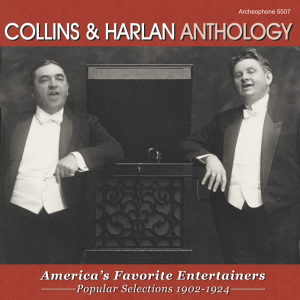 Before Phil and Don Everly, before Simon and Garfunkel, long before Hall and Oates . . . the most popular recording duo over the first quarter of the 20th century was the team of Arthur Collins and Byron G. Harlan. Dubbed “America’s Favorite Entertainers” as they crisscrossed America in the late 1910s and early 1920s promoting Edison’s superior talking machines, Collins and Harlan came face to face with the thousands of ordinary people who bought the records that became the comical soundtrack of a generation. They represented the best and the worst of popular culture: advancing the career of Jewish émigré Irving Berlin and Black songwriters such as Chris Smith, W.C. Handy, and Shelton Brooks, while also perpetuating racist stereotypes. The issues, as usual, are thorny, but Archeophone tackles them with care and honesty. GRAMMY-recognized authors Ryan Barna and Richard Martin present the clear-eyed but accurate case of these two rough-and-ready unlikely partners who also became friends and took the phonograph by storm. Over 29 tracks, we lead you from 1902 to 1924, depicting a story that has never been told in LP form until now. Fantastic sound, too—you won't believe how great these records sound!