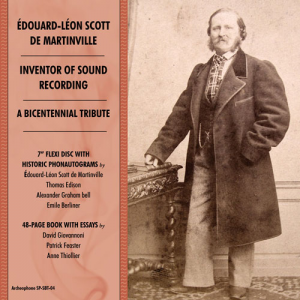 Edouard-Léon Scott de Martinville (1817–1879) invented sound recording twenty years before Thomas Edison re-invented it. But his phonautograph is only one of his many accomplishments. Here, at the bicentennial of his birth, his story is published in depth. This extensively illustrated 48-page softcover book presents new research on Scott and his role as the father of sound recording. Included is a 33-1/3 flexi disc with phonautograms not only by Scott, but also by famous inventors who were inspired by him and his invention: Alexander Graham Bell, Thomas Edison and Emile Berliner.