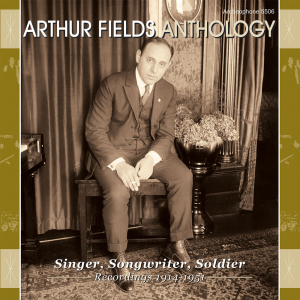 Wanting to run away from home since age eleven, Abraham Finkelstein was always after something. He masked his Jewish background by adopting the stage name Arthur Fields and launched a long and prolific career as a songwriter, vaudevillian, recording artist, radio personality, and music publisher. Featuring 26 tracks and a 32-page booklet with notes by Grammy-nominated author Ryan Barna, Anthology: Singer, Songwriter, Soldier tells the story of Fields’ four-decade recording career and constant reinventions. We hear his 1914 debut with a long-forgotten Irving Berlin number, follow along as he becomes one of the key voices and songwriters of World War I, then listen as he reinvents himself as a “hillbilly” during the country music boom of the ’20s and ’30s. The compilation ends with two remarkable selections: His emotional 1941 recording of “Der Fuehrer’s Face,” and a 1951 wire recording captured by record collector Dick Carty in which he reprises his most famous composition, “It’s a Long Way to Berlin, but We’ll Get There!”