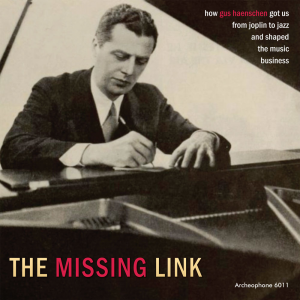 Under the pseudonym “Carl Fenton,” Gus Haenschen led some of the tightest orchestra recordings of the 1920s—but he also oversaw the musical direction at the Brunswick label, where he signed Isham Jones, Al Jolson, Nick Lucas, Abe Lyman, the Happiness Boys, and even Charlie Chaplin. Haenschen probably would not have gotten that job had it not been for his reputation as a musically innovative student of Scott Joplin—and especially for his recording of six personal sides in 1916 that are the stuff of legend. All but a couple were thought lost to history, but now, together with researcher Colin Hancock, Archeophone is proud to present all six of Haenschen’s explosive 1916 recordings, along with 19 other tracks that show his influence on the music industry. Move over ODJB. These six sides change the game, and they and their creator, Gus Haenschen, are the missing link between ragtime and jazz.