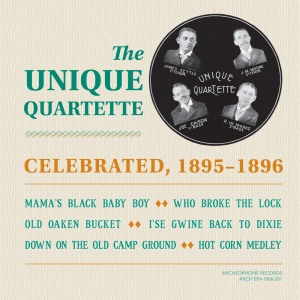 They came from the South to make their way in New York City. They worked as hotel porters and singing waiters. And the Unique Quartette, the first African American quartet ever to make records—beginning in 1890—have been a flickering historical mystery until now. Two of their wax cylinders appeared on our GRAMMY-winning Lost Sounds: Blacks and the Birth of the Recording Industry, 1891-1922, but that was thought to be the last word. This 10-inch vinyl compilation shows the group in all its barbershop-harmonizing glory over six expertly restored cylinder selections, whose existence is revealed for the first time only now. New research identifies the most likely members of the group to have participated in the recordings, and the dates and places of their births and deaths are published here for the first time. This version of "Down on the Old Camp Ground" is now understood to be the earliest one known, and the quartet-style yodeling on "Hot Corn Medley" is also the first waxed example of its type.