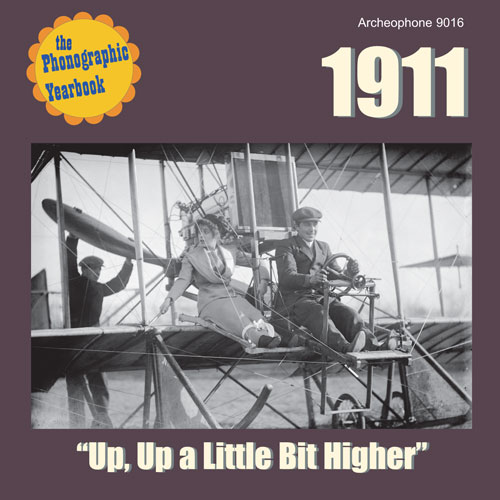 26 hits from 1911, the year the nation got wrapped up in the aviation craze and the Triangle fire changed workplace safety laws. Highlights include Gene Greene's "King of the Bungaloos," Blanche Ring's "Come Josephine in My Flying Machine," and Collins and Harlan's "Alexander's Ragtime Band. The set includes a 24-page full-color booklet with an interpretive historical essay on key events of the year and notes on all of the selections. List price: $17.49

26 gloriously restored tracks from the year that witnessed excitement and terror in the skies. The aviation craze delighted the country, but the fire at the Triangle Shirtwaist Company in New York City took 146 lives and horrified the public conscience. Safety laws put into place in the aftermath of the blaze were one aspect of progressive legislation that asserted government’s right to regulate the way business owners treated their employees. These are the stories behind the music on 1911: “Up, Up a Little Bit Higher,” the sixteenth volume in our popular Phonographic Yearbook series.

Some of the Most Popular Songs of All Time

Each year has at least one or two all-time classics, but 1911 seems to have had more than its fair share: Beth Slater Whitson’s “Let Me Call You Sweetheart,” performed by the Columbia (Peerless) Quartette; Shelton Brooks’ “Some of These Days,” by Sophie Tucker; Tell Taylor’s “Down by the Old Mill Stream,” by the Brunswick Quartette (with Arthur Clough, tenor); and Bryan and Fischer’s “Come, Josephine, in My Flying Machine,” sung in two versions. The first is by Ada Jones with Billy Murray and the American Quartet, and the second is by stage legend Blanche Ring. It’s irresistible no matter who’s singing it.

Another all-timer is Irving Berlin’s “Alexander’s Ragtime Band,” sung here in the most famous recording by Arthur Collins and Byron G. Harlan, and it has never sounded better. This was the song that started off the “second wave” of ragtime in the 1910s, even though many claimed it wasn’t really ragtime. The flip-side of the original disc, “The Oceana Roll,” by Eddie Morton, certainly fits the ragtime description, however, and songs such as “Stop, Stop, Stop” by Elida Morris and “King of the Bungaloos” by Gene Greene indulge in some most delicious syncopation as well. Listen for Greene’s groundbreaking “jig chorus,” often called a forerunner of scat singing.

Will Oakland made his first Columbia record in 1911, “I Love the Name of Mary,” the show-stopping winner by Chauncey Olcott. Counter-tenor Oakland sure could get up there! But he also did another Olcott, the evergreen from Barry of Ballymore, “Mother Machree”–as did Ireland’s favorite son, John McCormack. So you can compare and see which you think is the better version. McCormack also scored with “I’m Falling in Love with Some One,” from Naughty Marietta, the big Victor Herbert show, and he soars. Listen to the control and the masterful pacing McCormack displays. Another from Naughty Marietta is “Italian Street Song,” by Lucy Isabelle Marsh and the Victor Light Opera Company, which must have been a triumph of technical engineering, because there were a lot of people singing into that horn. “Mother Machree,” “I’m Falling in Love with Some One,” and “Italian Street Song” all had lyrics penned by Rida Johnson Young, who turned in a banner year. “Day Dreams, Visions of Bliss” comes from The Spring Maid, which starred Christie MacDonald.

Nautical and Other Novelties

Besides “The Oceana Roll,” several of the top hits of 1911 embark upon the sea for their imagery. “Steamboat Bill” is the story of an unlucky captain–a Casey Jones figure, only in a boat–heard here by Edward Meeker, the man whose voice can be found on hundreds of announcements on Edison cylinders. Ada Jones’ “All Aboard for Blanket Bay” is a tender lullaby aloft the waves, while Elida Morris asks in “Stop, Stop, Stop” for her lover to “Take me out upon that ocean called the ‘Lovable Sea.'” And lastly, “On Mobile Bay” is the very first duet recorded by Albert Campbell and Henry Burr, and it’s a good one. As for other novelties, Jones and Murray present the “Great Telephone Song” by Albert Von Tilzer, “All Alone.” Collins and Harlan yuk it up as usual on “Under the Yum Yum Tree” and “Put Your Arms Around Me Honey,” the latter revived in the 1950s by several artists, including Fats Domino. Take notice of one interesting development on this Yearbook: the formerly ubiquitous genre known as “coon songs” has started to slip away. It’s still present, but not as obviously; it’s as if the songwriters have started to speak in “code” on some of the songs.

“Jimmy Valentine” is one of the coolest things we’ve heard in a while. The Peerless do a descriptive scene of the notorious criminal being chased by police in the middle of the record, and it’s got enough commotion to be convincing. Byron G. Harlan does a nice solo turn on “I Like the Hat, I Like the Dress, and I Like the Girl that’s in It,” going somewhat against type with a song that’s not about mothers or babies. “Billy” shows the American Quartet at its harmonic best with Billy Murray, while the barbershop classic, “I Want a Girl Just Like the Girl that Married Dear Old Dad,” shows them to top effect with Walter Van Brunt guesting in place of Murray. The young Van Brunt also gives a stirring performance on “Don’t Wake Me Up, I Am Dreaming,” another hit by Beth Slater Whitson.