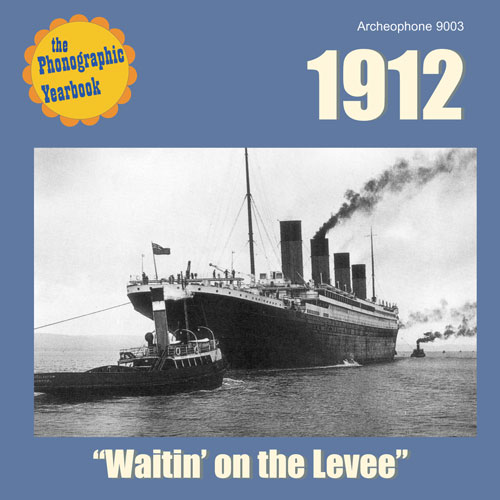 Ragtime was in a full-swing comeback in 1912. Tunesmiths like Irving Berlin rode the craze and churned out hit after hit. Now, whether Berlin’s “The Ragtime Violin” or Gilbert and Muir’s “Ragging the Baby to Sleep” were true ragtime is for musicologists to debate, but the public grabbed on to these songs as the real thing, much as audiences nearly 50 years later would consume rock and roll records in substitution for black rhythm and blues.

Jolson and Murray break out

Al Jolson’s first recordings for Victor were hits in 1912. He was a new Broadway sensation, starring in La Belle Paree and performing “That Haunting Melody.” Billy Murray, meanwhile, was in the process of becoming a recording superstar. The always popular Murray was featured on records as a solo singer (the risque “If You Talk in Your Sleep, Don’t Mention My Name”), in duets with Ada Jones (“Be My Little Baby Bumble Bee”), as the leader of the American Quartet (“Oh, You Beautiful Doll,” “Moonlight Bay,” “Everybody Two-Step”), and as a member of the Heidelberg Quintet (“Waiting for the Robert E. Lee”). So prominent was Murray that Columbia Records hired the young Murray sound-alike Walter Van Brunt to work with Ada Jones on duets such as “I’m Afraid, Pretty Maid, I’m Afraid,” since Murray was under exclusive contract to Victor and Edison.

Opera stars Enrico Caruso and Alma Gluck with Louise Homer thanked their faithful American audiences who, over the years, purchased all those expensive Victor Red Seal records, by giving them English-language recordings to feast upon. Caruso’s “Love Is Mine” and Gluck and Homer’s “Whispering Hope” are more serious than the rags of 1912, but they were smashes all the same. And, while not high-brow, the Scot Harry Lauder found Americans eager to hear his brogue-inflected musings on “Roamin’ in the Gloamin’,” a release in Victor’s 12-inch purple-label specialty series.

Archeophone’s “1912” CD has many of the biggest names of the acoustic era. In addition to Jolson, Murray, Caruso, Lauder, and the American Quartet, you’ll find Collins and Harlan (“I’m Going Back to Dixie”), Campbell and Burr (“When I Was Twenty-One and You Were Sweet Sixteen”), Bob Roberts (“Ragtime Cowboy Joe”), Fred Van Eps (“Red Pepper: A Spicy Rag”), Guido Deiro (“In the Land of Harmony and Stop Stop Stop”), and Ada Jones (doing the charmingly silly “Ring, Ting-a-Ling”).

Music during a time of international tragedy

The sinking of the Titanic was not simply an American problem; lives from both sides of the Atlantic were lost, and debate continues today over how class status affected who lived and who died. The color booklet accompanying this compact disc contains an essay that attempts to make sense of the time that encompassed both the fateful voyage of the Titanic and the re-emergence of ragtime. Also detailed is one of the most exciting presidential campaigns of American history, when former president Teddy Roosevelt challenged his one-time friend, the Republican incumbent William Howard Taft, before becoming the Bull Moose candidate. The result was a split vote that allowed Democrat Woodrow Wilson to sneak a narrow popular victory.