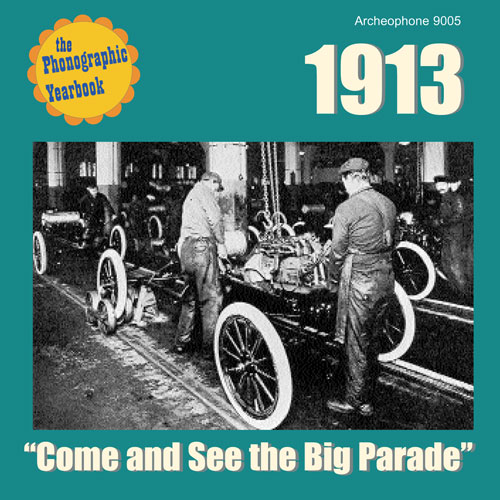 24 hits from 1913, the year that Henry Ford rolled out his first fully operational assembly line. Big songs by Alan Turner, Ada Jones ("Row! Row! Row!"), Al Jolson's first sides for Columbia ("Pullman Porters Parade" and "You Made Me Love You"), the Peerless Quartet, Campbell and Burr doing "The Trail of the Lonesome Pine", Charles Harrison with "Peg O' My Heart," and spirited numbers by Prince's Band ("Too Much Mustard") and the American Quartet, plus many more. Deluxe, full-color 24-page booklet features detailed notes on the songs, an historical essay, and rare graphics. List price: $16.99

Symbols of industrial progress, Ford’s assembly line and the erection of the Woolworth Building in New York (then the world’s largest edifice) suggest a world on the move in 1913. Some of that feeling is reflected in Al Jolson’s “Pullman Porters’ Parade,” but it’s in contast to the rustic tone of Collins and Harlan’s “When that Midnight Choo-Choo Leaves for Alabam'” and “Melinda’s Wedding Day” (an early hit on Edison’s new 4-minute Blue Amberol cylinders).

Henry Burr sets the tone on “When I Lost You,” the moving ballad that Irving Berlin wrote for his deceased newlywed wife. Burr further shows his power on the dramatic “Last Night Was the End of the World,” while an affectionate note is struck by the American Quartet on “That Old Girl of Mine” and by Helen Clark and Walter Van Brunt on “Sympathy.” And Jolie turns in an amazing performance on “You Made Me Love You,” from his first recording session with Columbia.

Comic songs such as Ada Jones’ “Row! Row! Row!,” Jolson’s “The Spaniard that Blighted My Life,” and Billy Murray’s “Snookey Ookums,” are all slightly naughty and all remained well-known for many years. The Peerless Quartet do the immediately catchy “Goodbye Summer, So Long Fall, Hello Winter Time,” and Elsie Janis performs her own “Fo’ de Lawd’s Sake Play a Waltz,” a tour-de-force that quotes 1912 hits “Oh, You Beautiful Doll” and “The Ragtime Violin.”

Out of the many songs about Ireland and her people that were popular during 1913, Chauncey Olcott’s “When Irish Eyes Are Smiling” (penned by the singer) and Charles Harrison’s “Peg O’My Heart” stand out. These tributes to old Erin’s isle are still sung today.

War in the Balkans broke out in 1912 and again in 1913. Conflicts that seemed so remote to Americans would, within a few years, entangle the U.S. in World War I, making the Dunlap-Macdonough vehicle, “When It’s Apple Blossom Time in Normandy,” sound almost prophetic. Meanwhile, Queen Mary’s fondness for turbans sparked a fad in America, and fascination for the Persian world can be heard in “Bagdad” by Billy Murray, “My Little Persian Rose” by the Peerless Quartet, and “Till the Sands of the Desert Grow Cold” by Alan Turner.