1917: "Yankees to the Ranks"
Various Artists 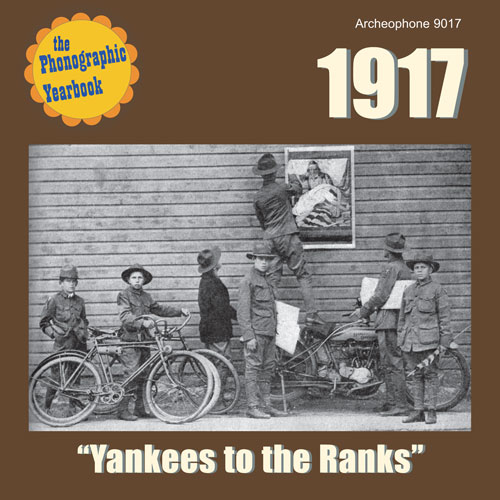 1917: "Yankees to the Ranks" presents 25 songs from the year the U.S. declared war on Germany and entered into World War I. The 24-page color booklet includes extensive notes on all the songs and an interpretive historical essay that tells the story of patriotic volunteerism. Old favorite artists such as Billy Murray, Campbell and Burr, and Collins and Harlan are all here in clear restored audio; so too are newcomers Van and Schenck, Marion Harris, Dietrich and Wright, Anna Wheaton with James Harrod, Arthur Fields, and the Original Dixieland Jazz Band on their first record! List price: $16.99

1917: “Yankees to the Ranks” presents 25 songs from the year the U.S. declared war on Germany and entered into World War I. President Woodrow Wilson had kept the nation neutral up through his November 1916 re-election, but the wheel of fortune could not be slowed down. Once Americans caught wind of the infamous Zimmermann Telegram–a German missive to Mexico offering terms in the event of an alliance against the U.S.–they had had enough of the Kaiser’s flaunting of American neutrality. After the April 6th declaration of hostilities, Americans of (almost) every political stripe signed up to help with the war effort, no matter how big or small it might have seemed. This, Archeophone’s fourteenth installment in The Phonographic Yearbook series, tells the story of patriotic volunteerism and presents the soundtrack to the year’s events in clear, masterful restored audio. Old favorite artists such as Billy Murray, Campbell and Burr, and Collins and Harlan are all here; so too are newcomers Van and Schenck, Marion Harris, Dietrich and Wright, Anna Wheaton with James Harrod, Arthur Fields, and the Original Dixieland Jazz Band on their first record!

The fad for all things Hawaiian had slowed down by 1917, but not before “My Own Iona” and “They’re Wearing Them Higher in Hawaii” made popular inroads. The former features authentic Hawaiian ukuleles played by Helen Louise and Frank Ferera, while the latter merely engages in predictable, if tuneful, wordplay. The public’s interest in things “exotic” shows up again in the Victor Military Band’s recording of Rudolf Friml’s “Katinka” (a medley of “Your Photo,” “Allah’s Holiday,” and “Rackety Coo”) and Raymond Hubbell’s “Poor Butterfly”–two of the biggest Broadway shows between 1916 and 1917.

“Jass” and Other Novelties

The goofiness of “Lily of the Valley,” expertly staged by Collins and Harlan, sounds like a throwback to an earlier time, while “M-I-S-S-I-S-S-I-P-P-I” has proved to be a timeless child’s play song, here presented by veteran Ada Jones on one of the peculiar early Emerson small discs. Marion Harris’ first releases, on the other hand, of “I Ain’t Got Nobody Much” and “They Go Wild, Simply Wild, Over Me” presaged something musically new afoot. If there were any doubt about the direction popular music was heading, the Original Dixieland ‘Jass’ Band answered the question with what has been called the first jazz record ever released, “Livery Stable Blues.” The players imitate barnyard sounds to humorous effect, giving critics of jazz ammunition as they fired off screeds calling it nothing more than loud animal noises. The music has lasted, whereas the complaints have diminished. We humbly submit that this restoration is as fine as you will find.

The War Comes Over Here in Song

It may have been the year that the ODJB broke out, but the real story of popular music in 1917 is, of course, the war songs that remain with us to this day. “Over There” was the biggest of them all. The all-time great anthem by George M. Cohan was so popular that at least three versions of it–by the American Quartet, the Peerless Quartet, and Nora Bayes–were among the biggest hits of the year. “Good-Bye Broadway, Hello France” and “I May Be Gone for a Long, Long Time” (by the newly formed Shannon Four) also scored big, as did a rousing version of “The Star Spangled Banner,” by recently-naturalized John McCormack. War-themed numbers of a more comical nature also found willing ears: “Where Do We Go from Here?” by Arthur Fields in front of the Peerless Quartet and “Oh Johnny, Oh Johnny, Oh!” by the American Quartet. “Johnny” was curious for having been published twice, the second sheet music featuring new patriotic lyrics. The original lyrics are here and they were made popular again in World War II by the Andrews Sisters.

“While you’ve a lucifer to light your fag…”

But remember that many of the war songs came originally from the Brits, including “Pack Up Your Troubles in Your Old Kit Bag (and Smile, Smile, Smile),” rendered here by the Knickerbocker Quartet, with baritone James F. Harrison guesting in the lead role. A “lucifer” is a match, and a “fag” is a cigarette. The song and its central character, Private Perks, try to make the best out of a bad–and worsening–situation. Henry Burr’s “Joan of Arc” (also recorded by its lyricist, Willie Weston) is an American tune, but it reflects poignantly on the patron saint of the people of Lafayette, who came to this nation’s aid in its early time of dire need.

Amidst the crazy novelties and jazz on the one hand and the march to war on the other stand a number of beautiful songs that have stood the test of time. “Hush-a-Bye Ma Baby (The Missouri Waltz)” was originally just a tune that got words added in time for Edna Brown (really Elsie Baker) to make it a haunting masterpiece of 1917. It eventually became Missouri’s state song. Then there’s “Lookout Mountain” by Campbell and Burr, referencing the side of the great mountain that faces Chattanooga, Tennessee, where a girl waits “with a mountain of love for me.” The Sterling Trio (Campbell, Burr, and John H. Meyer) give us “Indiana,” the original recording of the song sung every year by Jim Nabors at the Indianapolis 500. And finally we have the lilting melodies of “‘Till the Clouds Roll By,” from Oh! Boy! performed by its star, Anna Wheaton with James Harrod, and the wedding bliss of “For Me and My Gal” by sensations-to-be Gus Van and Joe Schenck.