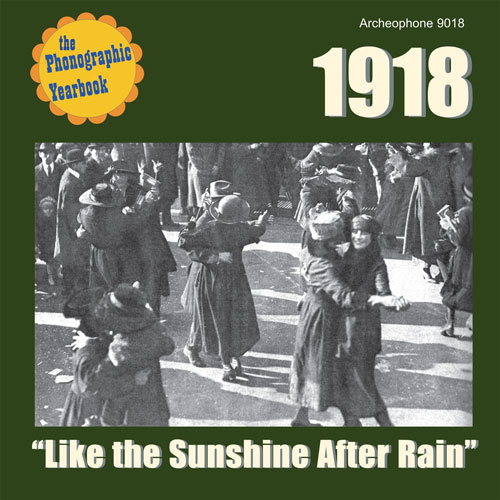 1918: "Like the Sunshine After Rain" features 24 selections from the year World War I came to a close and an influenza epidemic swept the nation. Selections include wartime and comic songs, songs that would become part of the Great American Songbook, and early jazz and dance numbers by Joseph C. Smith's Orchestra and the Original Dixieland Jazz Band. The CD includes a full-color 24-page booklet featuring an interpretive historical essay, notes on the selections, full discographical information and a bounty of historic photos and illustrations. List price: $16.99

24 meticulously restored tracks from 1918, the year that good news of peace was tempered by the realities of an influenza epidemic. The Armistice ending World War I came in November 1918, but at the same time the Spanish Influenza was ravaging cities at home and abroad. 1918: “Like the Sunshine After Rain” takes a look at American involvement in the war, Wilson’s famous “Fourteen Points,” and some recent scholarship on the causes and spread of the influenza–all set against the backdrop of the year’s biggest hits. The 15th volume in our Phonographic Yearbook series includes wartime songs by John McCormack, Billy Murray, the Peerless Quartet, Henry Burr, Al Jolson, Arthur Fields, and others; but it also features many of the same artists singing songs to cheer up Americans during hard times. And tracks by Joseph C. Smith’s Orchestra and the Original Dixieland Jazz Band point to where popular music was heading. As with other volumes, the CD comes with a full-color 24-page booklet featuring an interpretive historical essay, notes on the selections, full discographical information and a bounty of historic photos and illustrations.

Songs of Farewell and Resolve

John McCormack starts things off with “Send Me Away with a Smile,” whose stiff-upper-lip attitude masks the speaker’s uncertainty about going to face the foe. “Over There,” sung in English and French by Enrico Caruso, stands as the most enduring anthem of World War I, while “Battle Hymn of the Republic” by Charles Harrison and the Columbia Stellar Quartette shows that the old anthems still have power to firm up young men’s fighting resolve. Neither “Hail! Hail! The Gang’s All Here” (Irving Kaufman and the Columbia Quartette) nor “I Don’t Know Where I’m Going but I’m on My Way” (Peerless Quartet) are anthems of the same sort, but they kept the boys marching in time, reminded them of their comrades’ faith, and kept smiles on their faces.

Songs of Pathos and Longing

The most tender victims of any war are the children. We hear their voices in Jolson’s “Hello Central, Give Me No Man’s Land” and Burr’s “Just a Baby’s Prayer at Twilight (for Her Daddy Over There),” trying to understand where Daddy is, why he has gone away, and why Mama cries herself to sleep every night. The same sense of longing permeates “Roses of Picardy” by Lambert Murphy and “My Belgian Rose” by Shaw and Hart, paeans by patriots to the allied nations broken by the strife of the Great War.

Tunesmiths of World War I balanced seriousness with humor, and apparently both the soldiers and the American public appreciated the chance to laugh. Billy Murray’s “K-K-K-Katy,” about the stuttering private proposing to his girlfriend, and Van and Schenck’s “I Don’t Want to Get Well,” about the wounded soldier who doesn’t want to leave his hospital bed and the pretty nurse tending to him, were big hits still sung today. Irving Berlin’s classic, “Oh, How I Hate to Get Up in the Morning,” sung by Arthur Fields, is another well-remembered piece, wherein a soldier complains that the reveille guy keeps waking him up every morning. “They Were All Out of Step but Jim” and “Oh! Frenchy” further demonstrate that nearly every topic of the war was subject to lampooning.

The World Dances on–to the Sound of Jazz

The Original Dixieland Jazz Band broke out in 1917, and here they are again with the immortal “Tiger Rag,” a number inducted into the National Recording Registry on its inaugural list of 2002. The future jazz standard composed by Shelton Brooks, “The Darktown Strutters’ Ball,” is also here, performed by Collins and Harlan in what would be their last big hit. Two selections by Joseph C. Smith’s Orchestra appear in the collection: the exotic “Hindustan” and one of the year’s bona fide smashes, “Smiles.” The latter is curious for being one of the earliest dance records to feature a vocal chorus (by Harry Macdonough) in the middle of the music. This manner of arrangement would become ubiquitous on dance records of the 1920s, 1930s and 1940s–and
Smith started the trend!

Last but not Least, Songs for the Ages

The Great American Songbook grew by leaps in 1918, adding numbers both martial and sentimental. In the latter category, we have two more monster hits by Jolson, “I’m All Bound ‘Round with the Mason Dixon Line” and “Rock-a-Bye Your Baby with a Dixie Melody.” Charles Harrison contributes “I’m Always Chasing Rainbows,” a song that was popularly revived in the 1940s, and Henry Burr weighs in with two of his all-time biggies, “I’m Sorry I Made You Cry” and “Are You from Heaven?” With the end of the war, America’s loss of naivete, and the beginning of new kinds of popular music, the close of the year 1918 represents a soft dividing line in culture and music. Archeophone’s Phonographic Yearbook points a spotlight on those changes.