1920: "Even Water's Getting Weaker"
Various Artists 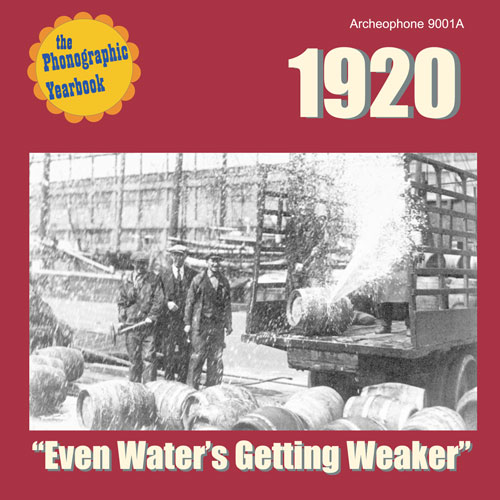 The biggest hits of 1920 are now available in a beautiful second edition! This is the first volume of Archeophone Records’ celebrated Phonographic Yearbook series, and this new edition features three bonus tracks, an expanded booklet, improved sound, and the high standards you’ve come to expect from the leader in acoustic-era reissues.

National Prohibition went into effect in January 1920, and Bert Williams moaned about the loss of his beloved liquor in “The Moon Shines on the Moonshine,” singing wryly, “Even water’s getting weaker / ‘Bout one tenth of one percent.” But also in January of that year, the U.S. went through its first “red scare,” in which thousands of suspected Communists were rounded up and arrested. Further, for the first time in American history, the population in cities surpassed that of rural areas, while veterans returning from World War I flooded an uncertain domestic economy.

No Prohibition Against Laughter

The palpable fear of change evident in American society was soothed over by the comedians, who took Prohibition as their subject. In addition to Bert Williams, there was Billy Murray urging his countrymen in “I’ll See You in C-u-b-a” to take a trip to the land where wine is flowing; Nora Bayes lamenting the passing of her old friend, Alcohol (“Al” for short) in “Prohibition Blues”; and Van and Schenck extolling the virtues of Mary in “All the Boys Love Mary.” It turns out that Mary’s charms are not in her face but in the secret her father keeps in the cellar.

The dance craze was in full swing by 1920, with Paul Whiteman’s first record, “Whispering” and “The Japanese Sandman” becoming one of the best-selling singles of the entire acoustic era. The future “King of Jazz” was joined in setting dance halls to music by Ted Lewis and his trademark “When My Baby Smiles at Me,” as well as Art Hickman, whose “Hold Me” features a splendid piano duet in the middle, and the Kentucky Serenaders’ “Rose of Washington Square” (one of the bonus tracks on this second edition). Possibly the biggest of all dance hits was “Dardanella,” by Selvin’s Novelty Orchestra, a song still played today.

Don’t Let the Blues Get You Down

The emergence of jazz was accompanined in the late 1910s by the blues, and here are featured several early attempts. Marion Harris shines on “The ‘St. Louis Blues'” and “Left All Alone Again Blues,” while trombonist Harry Raderman steps out with the Joseph C. Smith Orchestra on “Yellow Dog Blues” (another bonus track).

1920 had more than its share of classics, and they’re all here, in the best-sounding versions you will find anywhere on compact disc: songs such as Al Jolson’s “Swanee,” John Steel’s “The Love Nest,” Edith Day’s “Alice Blue Gown,” and Eddie Cantor’s “You’d Be Surprised” (the third bonus track included on the new edition). Archeophone’s “1920” CD is now a classic in its own right, and with this new edition, you’ll be surprised just how much better it is