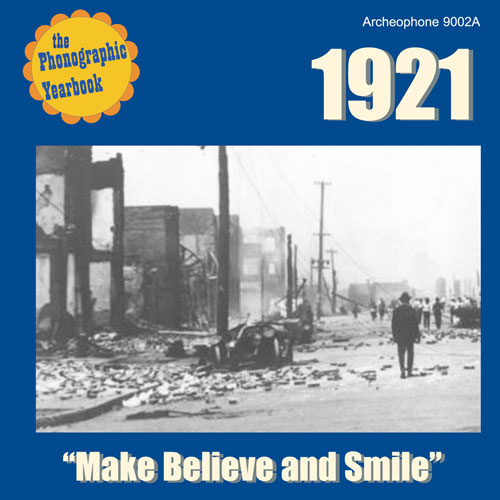 The year 1921 is usually described as a time when very little happened, as the newly-elected Harding administration tried to re-establish “normalcy” in post-war America. But there was trouble beneath the surface–while the U.S. was burying the Unknown Soldier and selecting the first Miss America, the country suffered its most violent race riot ever in Tulsa, Oklahoma. When a would-be lynching at the city jail in Tulsa was thwarted by African-American veterans of World War I, tensions erupted between blacks and whites, and for two days in June, the entire African-American neighborhood of Greenwood was leveled in flames and gunfire, leaving hundreds dead. In the essay included in the 24-page booklet that accompanies the hits of 1921, we take a close look at this painful chapter in Ameican history and set it in contrast to the year’s popular tunes.

Look for the Silver Lining

Was it coincidental that several hit songs of the very “normal” 1921 encourage us to keep a stiff upper lip, that times ahead will be better? Jerome Kern’s “Look for the Silver Lining,” sung beautifully by Marion Harris, is joined by “Make Believe,” performed here by Nora Bayes (and featuring a rather lengthy instruction on “bucking up”) in exhorting listeners to weather the storm. Vaudevillians Van and Schenck deliver a similar theme in “Ain’t We Got Fun?” but the biting irony of the lyrics invite a deeper view.

The Year of Whiteman

All the big hits by Paul Whiteman’s Orchestra from 1921 are featured here, the songs to which America danced its troubles away. Whiteman’s band was tightly structured, and the recordings meticulously engineered, without much left to chance–or improvisation. “Wang Wang Blues,” “My Mammy,” “Cherie,” and “Say It with Music” are all here, setting the pace for other dance bands such as Isham Jones’ Orchestra, with their more expressive “Wabash Blues,” and Leo Reisman’s Orchestra on “Bright Eyes.”

Songs of the South and the East

Popular songwriting in 1921 comes back full circle to the sunny South, and songs such as “Tuck Me to Sleep (in My Old ‘Tucky Home)” by Vernon Dalhart, “Home Again Blues” by Aileen Stanley,” and “My Mammy” by the Peerless Quartet stood out. These are songs, just like “Swanee” from the previous year and “My Sunny Tennessee” from the following year, that are homecoming songs, ones which sought chiefly to give comfort and solace in times of distress. At the same time, the allure of the East translated into big hits for the ODJB on “Palesteena,” Paul Whiteman on “Song of India,” and the Benson Orchestra of Chicago on “San.”

Mamie is in the House

The second edition of “1921” features one bonus track–perhaps the most important song of the year: “Crazy Blues” by Mamie Smith and Her Jazz Hounds. The players jazzed for real, the singer wailed her heart out, and black consumers bought the record in droves. As a stark contrast to the events of Tulsa, the artistic and commercial achievement of “Crazy Blues” showed that African-Americans were a cultural force to be reckoned with.