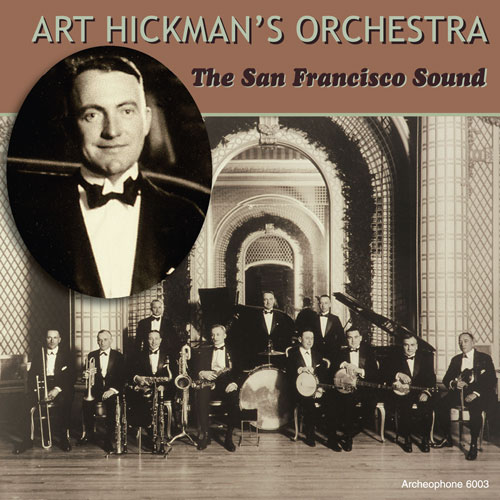 The San Francisco Sound compiles 25 selections from Hickman's 1919-1920 sessions together with extensive notes by Bruce Vermazen in a 24-page booklet. Hickman's sound influenced big band 20 years later, but you will be amazed at just how hot these guys could play!  List price: $16.49

Already the leader in reissuing acoustic-era dance bands that you never thought you would find on CD, Archeophone presents this collection of 25 sides by Art Hickman’s Orchestra, whose arrangements are said to have presaged the Big Band sound of the 1940s. If you like tuneful, “sweet” jazz from the late 1910s and early 1920s, then this is the set for you, though if you are interested in dance bands with a hot side to them, you will be surprised to find that Hickman’s boys could really set the place on fire.

Hickman’s band hasn’t received its due until now, probably because it is hard to pin down its style. With multiple banjoists, alternating saxophonists, a heavy percussion section, and a prominent piano, the Hickman orchestra slipped in and out of comfortable categories. A tune such as “Peggy,” featured on Hickman’s second disc release, is a straightforward fox-trot with a sax solo, while “Dance It Again with Me” begins plainly enough but is punctuated by individual flourishes before branching into an improvisational free-for-all.

The bandleader began his professional career as a sports and entertainment writer before he began playing in bands sometime around 1913. Whether it was drums or piano that he first essayed is not known; however, the initial recordings loudly display his drumming and woodblocks on “On the Streets of Cairo” and “Burmese Belles.” The piano duets between Hickman and Frank Ellis are featured a little later, on “You and I,” “Hold Me,” and “Rose Room,” the latter being the song that Benny Goodman called Hickman’s loveliest tune.

San Francisco was a world away from the New York studios of Columbia in 1919, when the Hickman band boarded the train and made the cross-country trip to wax their first records. Once in the Big Apple, the Hickmans got to business. All the recordings here except for the final three were made in an 11-day period in September 1919. Bruce Vermazen’s excellent notes in the CD’s accompanying 24-page booklet chronicle that trip and the fascinating rise of Arthur George Hickman and his sidemen, future stars in their own right: Clyde Doerr (saxes), Frank Ellis (piano), Ben Black and Vic King (banjos), Steve Douglas (violin), Walter Roesner (trumpet), Fred Kaufman (trombone), Bert Ralton (saxes, oboe, and English horn), and Bela Spiller (string bass).

It Must Be the Heat

Hickman’s outfit shows they can jazz it on “Those Draftin’ Blues” and “The Hesitating Blues,” both of which get very wild. Also very hot are the two numbers by the Hickman Trio (comprising Doerr and Ralton on dual saxes with Ellis on piano): “Wonderful Pal” and “Nobody Knows.” These were the last selections Hickman’s Orchestra made before returning to San Francisco. In the summer of 1920 on their next trip to New York, the Hickmans made some of their biggest hits: the beautiful “Hold Me” and the classic number, “The Love Nest.” They proved their versatility and altered the landscape of possibilities for dance and jazz bands making records in the 1920s.