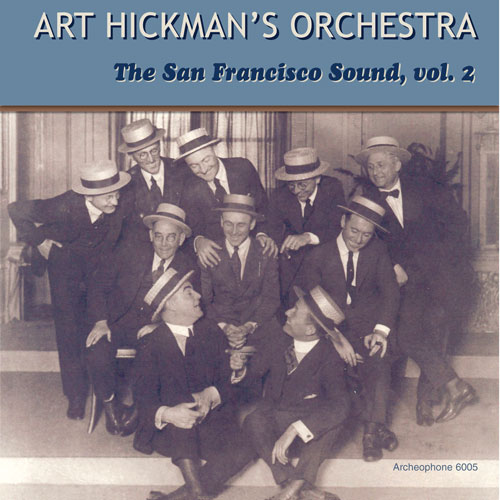 The San Francisco Sound: Volume 2 compiles 25 selections from Hickman's 1920-1921 sessions together with extensive notes by Bruce Vermazen in a 24-page booklet. The follow-up to our first collection of Art Hickman's recordings, this second volume brings to a close thestory of the influential band's dominance of dance floors on both U.S. coasts. List price: $16.49

The follow-up to the very popular first volume of the Art Hickman Orchestra’s 1919-1920 recordings called The San Francisco Sound. This second volume features another 25 tracks, recorded between 1920 and 1921, and brings to a close the story of the influential band’s dominance of dance floors on both U.S. coasts. In some ways this collection is more subdued than Volume 1, but for the jazz collector, The San Francisco Sound, Vol. 2 has plenty of treats in store. These selections find Hickman’s players taking greater freedoms than before and developing their own distinctive jazz style.

Fighting for Prominence with Whiteman

Before Paul Whiteman’s band first recorded in August 1920, the Hickman outfit had the dance-band field largely to themselves for close to a year. But after that, the two groups struggled for control of the market, and Whiteman got the upper hand. It may be simply that with “Whispering” and “The Japanese Sandman,” (both on 1920: “Even Water’s Getting Weaker”) Whiteman put his trademark on the classics earlier and beat Hickman to market. Too bad, as close listening to the Hickman versions of “Whispering” and “The Japanese Sandman” is rewarded by intricate passages by Frank Ellis on piano and Bert Ralton on soprano sax.

If you like the piano solos from Volume 1 of The San Francisco Sound, there are more here to enjoy, especially on “June,” which features a more prominent piano sound, showing the studio engineers were finally getting the hang of Hickman’s sound, always featuring shifting leads. Art Hickman again highlights his abilities on tom toms on the rhythmic and infectious “Hokum,” a piece that allowed the players less freedom than usual—but that also featured innovative dance-band arranging with its two-trumpet team playing over concerted saxes and trombone.

Just a couple of months after their first sessions in New York, the Hickman band returned in the fall of 1920 to the Big Apple for more recordings and a gig as the finale in Ziegfeld’s Follies and, afterward, at the Midnight Frolic. Before they finished up, the Hickman Trio, composed again of Frank Ellis on piano and Clyde Doerr and Bert Ralton on saxes, waxed a couple more tracks, “Nightingale” and “Sweet Little Stranger.” So much in demand by Columbia were the Hickman Orchestra that in February 1921, just four months after their previous session, the company sent a team out to San Francisco to make more recordings. Bert Ralton and Vic King were out by this time, and Walter Beban (tenor sax) and an unknown trumpet player were added.

End of the Road

Clyde Doerr left the band shortly after the February 1921 sessions, marking the end of the early Hickman recordings. The group struggled on for another year, and after a six-month engagement at the Cocoanut Grove restaurant in the new Ambassador Hotel in Los Angeles, they broke up in April 1922. Hickman himself dropped from largely from view, making a few recordings over the next few years, before he died of Banti’s disease at the young age of 43, in January 1930. Hickman left us a sizeable achievement, the influence of which we can now appreciate 85 years later.