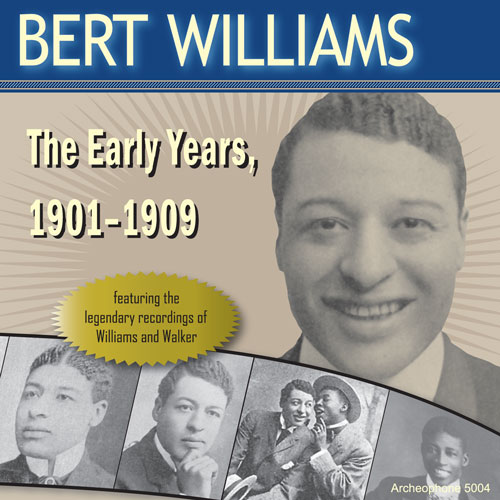 The first volume of The Complete Bert Williams, featuringthe legendary comedian's rarest records. 31 tracks from 1901-1909, including several with George Walker: 15 tracks from their 1901 sessions and a further 16 tracks from sessions in 1906 and following. Five selections are featured in both their 7- and 10-inch disc versions, and the collection includes all four of Williams' 2-minute cylinders, one 3-minute cylinder, and one rejected take from 1906. The 32-page full-color deluxe booklet features illustrations as rare as the records, with notes co-authored by renowned scholar Allen G. Debus and also reprints in its entirety George Walker's 1906 reminiscences about the beginnings of Williams and Walker in "The Real 'Coon' on the American Stage." List price: $17.49

Archeophone’s most highly anticipated CD release to date, Volume 1 in our Complete Bert Williams series, The Early Years, 1901-1909, compiles 31 of the legendary comedian’s recordings dating back as far as his landmark Victor sessions, through to his 1906 Columbia sessions at which Williams waxed several of his trademark songs. The CD is accompanied by a stunningly beautiful 32-page full-color deluxe booklet with extensive notes on Bert Williams’ early life and stage career up to 1909, extremely rare graphics, and an essay from 1906 on African Americans in the theatre by Williams’ partner, George Walker.

The Rarest of the Rare

Archeophone has searched high and low for five years to obtain the rarest records Bert Williams made-indeed some of the rarest records in the world. Our efforts have borne extensive proof, and we present here 15 sides from Williams and Walker’s 1901 sessions. Five of the selections–“I Don’t Like that Face You Wear,” “The Phrenologist Coon,” “Where Was Moses When the Light Went Out,” “All Going Out and Nothing Coming In,” and “Good Morning, Carrie”-are presented in both their seven- and ten-inch disc versions. Sometimes, the longer version of a song merely repeats a verse or a chorus, but not always. Listeners who have never heard these before will be surprised especially on “Face” and “Carrie” at
how different the versions could be.

As the accompanying notes discuss, Williams and Walker starred in several hit productions in the late 1890s and introduced their hilarious version of the cakewalk to the American public. But beginning with Sons of Ham, the team began a string of major stage successes, and the recordings on The Early Years chronicle several of these shows. “In My Castle on the River Nile” and “Good Morning, Carrie” are two such songs featured in Sons of Ham. It demonstrates the theme of native Africans that Williams and Walker were fascinated by and dramatized frequently. Abyssinia is also well-represented, with Bert’s signature “Nobody” (from the rare Marconi take), “Let It Alone,” and the wry “I’m Tired of Eating in the Restaurants.”

We get a strong taste of the electric sense of humor and interplay between the great team of Williams and Walker on these records too. They laugh and play throughout, as you can hear by George Walker’s background contributions to Williams’ solo attempt on “All Going Out and Nothing Coming In” and by Williams’ vocal foolishness behind Walker’s lead on “Pretty Desdamone.” But there are other surprises: note that Bert accompanies George on piano on such tracks as “Her Name’s Miss Dinah Fare,” and that some of Williams’ routines from vaudeville, such as the minstrel-style “The Mississippi Stoker,” are here too. And we are happy to present for the first time the rare rejected take of Bert’s “I’ve Such a Funny Feeling When I Look at You.”

All four two-minute cylinders Bert Williams made are included here. Since the cylinders did not go as long as their disc counterparts, Bert shifted his routine to take advantage of the space. On “He’s a Cousin of Mine,” Williams breaks into song in the last chorus, in vaudeville “big-finish” style. But if these uncommon treasures weren’t enough, The Early Years includes what may be the only extant copy of the three-minute, six-inch 20th Century cylinder of “Here It Comes Again.” We couldn’t make such rarities available to you except through the generosity of our gracious contributors.

Never before have these one-of-a-kind recordings been gathered in one place, and never with such a handsome and informative package. In fact, most of these recordings have not been heard by the public in over 100 years. Archeophone Records is proud to deliver this unprecedented collection of songs by Bert Williams, a true American treasure.