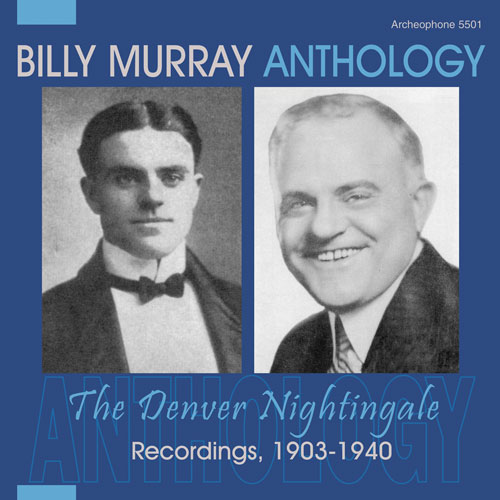 Newly remastered in 2018—sounds better than ever!
30 songs from 1903-1940 that provide a career retrospective of the most popular recording artist of the acoustic era. Includes the rare brown wax cylinder of "The Way to Kiss a Girl" from one of Billy's first recording sessions for Columbia, and "It's the Same Old Shillelagh," peformed with Harry's Tavern Band in his comeback of 1940. Features collaborations with Ada Jones, the American and Haydn Quartets, Aileen Stanley, Ed. Smalle, and Walter Scanlan. A thick 24-page booklet contains a biographical essay and song notes by Murray biographer Frank Hoffmann and a reminiscence of Murray by a man who knew him, Quentin Riggs! List price: $16.99

For the first time ever on a commercial CD, here are 30 songs that span the five decades of Billy Murray’s career. Included are Murray’s biggest hits, such as “The Grand Old Rag,” “In My Merry Oldsmobile,” and “I Love a Piano.” Also featured are tracks representing the depth and breadth of Billy’s recordings, such as one of his first, “The Way to Kiss a Girl”; one of his most biting, “He Goes to Church on Sunday”; one of his most wry, “He’s a Devil in His Own Home Town”; and one of his very last, “It’s the Same Old Shillelagh.” Anthology includes a 24-page booklet featuring contributions from Murray biographers Frank Hoffmann, Quentin Riggs, and Dick Carty, as well as the story behind the biggest hit Murray never recorded—”Take Me Out to the Ball Game.”

The Biggest Star of the Acoustic Recording Industry

Through 1925, nobody else even came close. Murray outsold all other performers from the time of his breakout records in 1903 through to his retirement in 1943. Each of Murray’s successive efforts—first, “Yankee Doodle Boy,” then “The Grand Old Rag,” and later, “Casey Jones,” by the Murray-led American Quartet—was announced as the biggest seller for Victor Records. Prior to 1950, only Bing Crosby surpassed Murray in popularity, and from 1951 through 1999, only Elvis and the Beatles have had a similar impact on the recording industry.

The songs that Billy Murray popularized are classic American tunes, from “Meet Me in St. Louis, Louis” to “Give My Regards to Broadway,” and from “Harrigan” to “K-K-K-Katy (Stammering Song).” You’ll notice that a number of the songs were composed by George M. Cohan: more than any other recording artist of the early industry, Murray was the primary interpreter of the now-famous songs of Cohan, the original “Yankee Doodle Boy.”

Murray was also part of several of the most important early duos and ensembles making records. The team of Ada Jones and Billy Murray sold more records than any other duo in the acoustic period. But Murray had success later on singing duets with Aileen Stanley, Walter Scanlan, and Ed Smalle. Each pairing brought him new challenges, and Anthology lets you hear Murray’s amazing versatility. Some of his finest work was with quartets, especially the American Quartet, and as guest tenor with the Haydn Quartet. These groups are also represented on Anthology.

Billy Murray has been noted for his unique ability to enunciate so that every syllable could be clearly heard and understood. He was a master of style and form, performing every kind of popular music, from tender ballad to comic song. If you don’t have any music from the acoustic era, this CD is the one to start with!