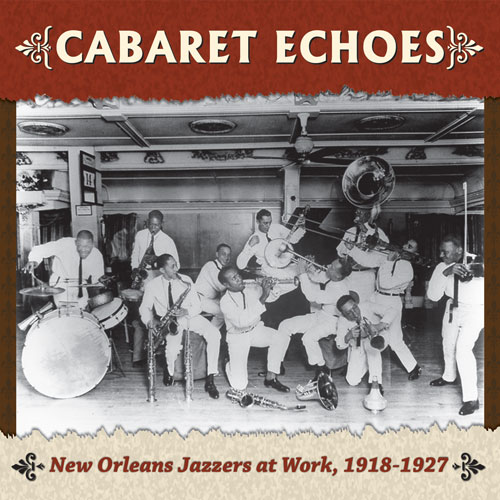 Off The Record's follow up to their highly acclaimed King Oliver set! Cabaret Echoes presents 40 rare recordings by artists that lived and worked in New Orleans alongside 23 spoken introductions by the musicians themselves. The 2-CD set also includes a 60-page booklet with rare photographs and illustrations of the artists--many of which have not been seen since their original publication--and a detailed essay that places the recordings and artists in their historical context. List price: $31.99

New Orleans holds a special allure like that of no other city, and its most famous music has cast its spell on the world for more than a century. New Orleans jazz has been discussed and written about nearly as much as it has been performed, and its recordings have been issued and reissued constantly since 1917. Many of the earliest seminal recordings are muddy and indistinct due to the primitive equipment used. Many reissues of this material have clouded the sound even further.

Now once again, master restoration engineer Doug Benson and jazz historian David Sager bring you the earliest and scarcest of New Orleans. Cabaret Echoes brings together 40 rare recordings by actual working New Orleans groups, restored with unprecedented clarity. They are presented alongside 23 spoken introductions by the musicians themselves, taken from rare one-of-a-kind interviews.

As with the previous Off The Record release, Benson, using his pitch-perfect musical ear, the teachings of the late John R.T. Davies, and up-to-date digital technology has meticulously restored these 40 rare jazz classics. Sager, after going through many hours of recorded oral histories and carefully applying his well-honed musical skills, has written a scholarly essay that creates an historical context for these selections.

In the late spring of 1922, a group of musicians—immigrants from the city of New Orleans—entered a threadbare Los Angeles recording studio and cut the first records by a black New Orleans jazz band. The six surviving sides featuring Kid Ory’s Sunshine Orchestra are priceless docucabments that prove how sophisticated jazz could be, even at that early date. Also, these sides capture a band that was a real working unit, performing as they did nightly at the Creole Café in Oakland. Unfortunately, the recordings are decidedly low-fi, even for those pre-microphone days; and the various reissues to date do not serve the music or the musicians well.

Off The Record, the label that brought us the startling restorations of the 1923 King Oliver Creole Jazz Band, now offers the six legendary Kid Ory Sunshine/Nordskog sides in remarkable fidelity (even Ed Garland’s faint string bass can be heard!), along with 34 other early recordings of actual working New Orleans bands.

First Recordings Of Jazz From New Orleans—Oh, the Clarity!

This marvelous set also includes the first jazz recordings made in the city of its birth, New Orleans. Collected here are all of the sides made by working ensembles during OKeh Records’ 1924 and 1925 field trips. These recordings, already known for their comparatively superior sonic detail, are rendered here with greater clarity than ever before.

The Musicians Speak For Themselves

Not content with just the music, OTR, in cooperation with the Hogan Jazz Archive of Tulane University, has also included spoken introductory tracks by many of the performing musicians. These rare excerpts taken from the Hogan Archive shed valuable light on the early days of jazz. Included are the voices of such early jazz luminaries as Kid Ory, Willie Hightower, Abbie Brunies, The Loyacano Brothers, Billy and Mary Mack, and many others.

So, what does Jimmy Durante have to do with New Orleans jazz anyway? The answer—PLENTY. In 1915 Durante was hired to work at the rowdy Alamo Café in New York’s Harlem. For his band he imported three New Orleanians (and one Chicagoan) and in 1918 the Original New Orleans Jazz Band became the second jazz band from New Orleans to make records. These historic recordings—the only ones made by legendary Creole clarinetist Achille Bacquet—are reissued here complete for the first time.

Willie Hightower And His Nighthawks

Among the very rare recordings presented in this set is one of the rarest of them all—”Boar Hog Blues” and “Squeeze Me” by New Orleans cornetist Willie Hightower and his band, which was composed of several New Orleans natives including Richard M. Jones, Bud Scott, and John Lindsay. This ultra-scarce disc is presented in unprecedented beautiful fidelity, with Mr. Hightower himself introducing the titles!

And, of course, there is David Sager’s insightful, scholarly, but entertaining essay—a fine follow-up to his Grammy-nominated notes for King Oliver, Off The Record. The essay is written from the point of view of someone who not only lived in New Orleans for many years but actively performs classic New Orleans-style jazz. The words are carefully selected to complement the music.

Sager has also selected a plethora of illustrations: photographs and ads culled from rare trade journals and vintage newspapers, rare record labels, and sheet music covers. Many of these have not been seen since first published in now-defunct trade journals and New Orleans newspapers. Included are photos taken inside OKeh’s makeshift New Orleans studio, a previously unpublished photograph of the Original New Orleans Jazz Band (with Jimmy Durante and Achille Baquet) and a rare photo of the Original Tuxedo Jazz Orchestra from Talking Machine World.

The essay and illustrations are handsomely presented in a 60-page booklet—beautifully designed by Richard Martin and Meagan Hennessey of Archeophone Records. Known for their outstanding artistic endeavors, this booklet presents the words, pictures, and music with the finest style and highest class.

The great duo has done it again! This is like hearing the music—really hearing it—for the first time, and the interviews add another dimension. Excellent notes as well. Congratulations!
—Dan Morgenstern, Director, Institute of Jazz Studies, Rutgers University

“WOW! A great job of transfers—the Ory Nordskogs never sounded this good, and that goes down the line . . . for the first time I can enjoy hearing these early instrumentals. An important addition to the historic library.”
—George Avakian, legendary jazz record producer

For anyone interested in achieving depth on the early development and variegation of jazz (and understanding New Orleans musicians’ role in it), this double CD package is a blessing.
—Bruce Boyd Raeburn, Curator, Hogan Jazz Archive, Tulane University

Doug Benson and Dave Sager strike New Orleans gold again! Those who treasure their masterful (and masterfully annotated) Off The Record collection of King Oliver’s 1923 masterpieces will welcome more astonishing New Orleans music from the early days. It wasn’t like anything else in those days, and it still packs a wallop ninety years later.
—Dick Spottswood, Author/Compiler Ethnic Music on Record, producer, radio host