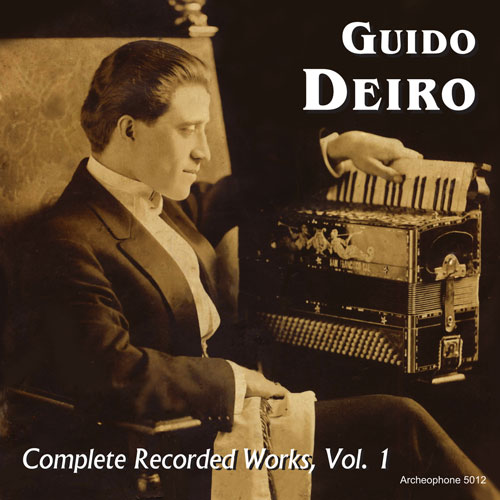 The greatest piano-accordion player ever to grace the instrument! Compiled with the assistance of Guido Deiro's son, Count Roberto Guido Deiro, and featuring the scholarship of master accordion player Henry Doktorski. Tracks range from light classical and operatic to ragtime and the pop hits of the day.  List price: $16.49

Count Guido Pietro Deiro (1886-1950) was, without doubt, the first star of the piano-accordion. Born in Italy, he immigrated to the United States in 1908 and became a vaudeville headliner in 1910. For two decades he was the premier piano-accordionist in America and a trailblazer in the field. Deiro was the first piano-accordionist to perform a solo concert in America, play on the vaudeville stage, perform as a soloist in vaudeville, use the name “piano-accordion,” make sound recordings of the piano-accordion, write a hit song (his “Kismet” was the theme song of a successful Broadway musical), play on a radio broadcast, and star in a sound motion picture featuring the accordion. Furthermore, Deiro was one of the highest paid musicians on the vaudeville circuit, commanding an incredible salary of $600 per week. And at the same time—though few people realize it today—he was married to the beautiful actress Mae West.

There has been much confusion about the origins and popularization of the piano-accordion, and this first volume of Guido Deiro’s works will begin to dispel the myths and demonstrate that Guido was the one to introduce the instrument to a wide audience in America. After coming to the U.S., Guido settled with family in the Pacific Northwest and gradually made his way, playing at the World’s Fair in Seattle in 1909 and creating quite a stir. By 1910, Guido had made a name for himself, performing “Sharpshooters’ March” and “My Treasure Waltz,” and turning what had been an ethnic instrument into a virtuosic crowd-pleaser. Volume 1 of Guido’s Complete Recorded Works witnesses approximately a year and a half of Deiro’s rise to stardom.

An Expert at Different Styles

Guido shows here that he could play anything. He succeeds equally at marches (“Los Bomberos”), waltzes (“La Spagnola” and “Ciribiribin”), devotionals (Gounod’s “Ave Maria”), operatic arias (“Prelude to Act 3 of La Traviata” and “Quartet from Rigoletto”), rags (“Dill Pickles Rag”), and popular songs “(“‘In the Land of Harmony’ and ‘Stop! Stop! Stop!'”). Two other pieces, “Variety Polka” and “Egitto,” are Deiro originals showing off the composer’s skills with the polka and with a classical fantasia. Guido could produce multiple voices from his instrument in the same performance, thereby giving his playing an orchestral quality.

Notes are provided by noted accordionist and free-reed scholar, Henry Doktorski, and Count Guido Roberto Deiro, the son of Guido Deiro. Count Deiro has also provided photos and illustrations from his own family’s collection in helping us achieve a top-notch product of stunning visual beauty. Together, Doktorski and Deiro are telling Guido’s story for the first time and restoring him to his rightful place in the history of the piano-accordion.

It has been our privilege to work with Count Guido Roberto Deiro in assembling this musical and historical tribute to his father, Guido Deiro. He writes:

“I was brought to tears as I reviewed the material and realized how proud my father would have been to see and hear his works and his early successes published. It has taken me over fifty years to accomplish what my father had asked me to do just before he passed away; forever remember his musical contributions and somehow correct the early history of the introduction and popularization of the instrument. This work could not have been accomplished without the collaboration of a number of brilliant, talented people, not the least of whom are Henry Doktorski, Richard Martin and Meagan Hennessey. My heartfelt thanks to you, and be assured to know what a relief and a joy it is to me to have been able to live up to the promise I made to my father so many years ago.”