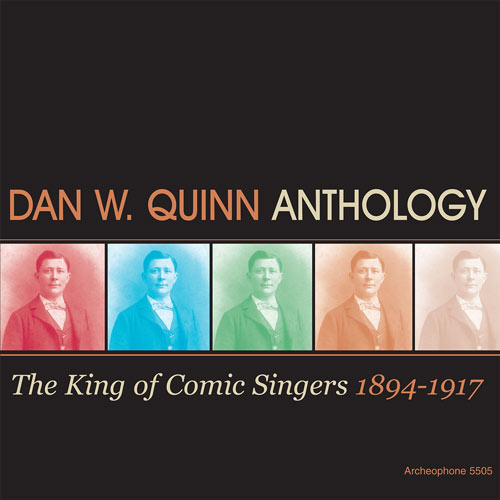 Anthology: The King of Comic Singers, 1894-1917 features 30 selections, taken from rare cylinders and discs, that highlight Dan W. Quinn's quarter-century in the studio, featuring the up-to-date comic numbers he was best known for, along with sentimental ballads and ragtime songs he helped establish as standards. The 52-page booklet inside the digipak presents original research and stunning new discoveries about the man and his career, illustrated with many previously unpublished photos.  List price: $17.99

For thousands of patrons listening to a phonograph for the first time in the 1890s, the voice they heard coming out of the horn belonged to Dan W. Quinn. In an era when performers were seen as secondary to the song, early record buyers understood that the name Dan Quinn meant the record was a winner. He always brought the newest hits, sung with pep and consistent clarity, and he did so thousands of times for dozens of labels. These 30 selections, taken from rare cylinders and discs, highlight Quinn’s quarter-century in the studio, featuring the up-to-date comic numbers he was best known for, along with sentimental ballads and ragtime songs he helped establish as standards. The 52-page booklet inside presents original research and stunning new discoveries about the man and his career, illustrated with many previously unpublished photos.

Among the Very First Recording Stars

Quinn recalled making his first test for the phonograph at a social club in Hoboken, January 1892, when the commercial recording business was only about three years old and fighting mightily for visibility. Hired by the New York Phonograph Company, and then by the United States Phonograph Company, Quinn quickly brought vitality to the new medium. He had amazing versatility and extraordinary stamina—meaning he could sing just about every kind of song hot off the publishers’ presses and he could do so for hours on end, filling demand for records “by the round” in those days before mastering technology. Dan made himself indispensible to all the record companies of the 1890s and familiar to consumers of phonographic entertainment.

In 1896 Quinn estimated he had already sung 2,500 songs over about a five-year period, so choosing representative pieces for this collection has certainly been a challenge! We’ve gone back to 1894, almost to the very start, and followed his career forward to 1917, close to the end of the singer’s career. Some of the best-known hits of the Gay ’90s are here, such as “The Streets of Cairo,” “A Hot Time in the Old Town,” “My Pearl Is a Bowery Girl,” and “On the Banks of the Wabash.” Quinn helped bring these and other songs into prominence when they were new. He was a songwriter himself, too, and the 1894 selection, “Lindy, Does You Love Me,” shows what he could do with lyrical songcraft. Once the industry switched to a system of making permanent masters, Quinn had less work to do but nonetheless put his definitive stamp on early 20th century classics, such as “Bill Bailey, Won’t You Please Come Home,” “Good Morning, Carrie,” “Mister Dooley,” and “O Didn’t He Ramble.” Retired (or unemployed) from recording after 1906, Quinn made a comeback in 1915, recording “Beatrice Fairfax, Tell Me What to Do” and “At the Fountain of Youth.” The old-timer was hired by all the new companies that sprang onto the scene in the late 1910s—Gennett, Paramount, Operaphone, Rex, Majestic and others—before quitting for good around 1918.

Besides the obvious “hits,” Anthology presents Quinn’s versions of “Drill, Ye Tarriers, Drill,” “Ma Blushin’ Rosie,” “My Jersey Lily,” and “Football.” These are songs you’ve heard by other artists (such as Al Jolson), and now you get to hear Quinn’s spin on them. With his charm and precision, it’s easy to see why one company advertised about him that “His name is a guarantee of the record.” Other important tracks here display how Quinn worked for just about every company, including the American Talking Machine Company (“Say You Love Me Sue,” a brick-red etched disc), Lambert Company of Chicago (“Couldn’t Help It, Had To”), the Brooklyn Phonograph Company (“Oh, Wouldn’t that Jar You?”, a “Phonetic” record), and the American Record Company (“The Growler on a String,” a “blue Indian” record). For Zonophone, Quinn recorded “Fol De Iddley Ido” with Helen Trix, one of the very few duets he ever did.

New research presented in the extensive notes accompanying the CD tell Quinn’s story more thoroughly and accurately than ever before. Scarce details about his parents and siblings, his occupation as a young man, his wife and kids, and his breakthrough into the recording business are outlined here in Richard Martin’s fascinating essay. Moreover, we challenge the traditional wisdom on Quinn’s “quiet years,” when he worked as a booking agent in New York City. And, in true tabloid style: perhaps most intriguing of all are the revelations about Quinn’s involvement in one of the most notorious scandals of the Gilded Age—the Seeley Dinner of December 1896, often called the world’s first modern bachelor party (and certainly the first to be busted by the police).

The 78-minute compact disc comes housed in an attractive, full-color digipak with a 52-page booklet that includes an essay, track notes, a full discography, and numerous photographs, news clippings, catalog images, sheet music, and other illustrations. Both the sound and print quality are first-rate. You’ll barely believe you are listening to music made 120 years ago! In fact, the dozen brown-wax cylinder selections here are possibly the best of that medium you’ve ever heard. Listen to the samples below for “The Handicap Race,” “Mr. Captain, Stop the Ship,” or “They All Follow Me” and see what we mean.

Not only is Anthology: The King of Comic Singers a thoroughly enjoyable CD to listen to and read, it fulfils with distinction Archeophone’s mission of preserving and contextualizing the world’s oldest recordings. We are proud to call this one of our very best productions and know you will agree.

As noted by Jim Walsh, chronicler of pioneer recording artists, if you were to walk into 312 West 20th Street in Manhattan in the early 1930s, you would be standing in a theatrical booking agency, run by one Dan W. Quinn. But what Walsh didn’t realize was that this was also Quinn’s home. Now what … END_OF_DOCUMENT_TOKEN_TO_BE_REPLACED →
posted: May 1, 2015

Revised April 30, 2015 to include new information from the Quinn family. We’re getting close to wrapping up our Anthology of Dan W. Quinn, and something occurs to us. One of the challenges in telling the stories of the pioneer recording artists is trying to get a sense of what they were like as people. … END_OF_DOCUMENT_TOKEN_TO_BE_REPLACED →
posted: April 3, 2015

Yesterday we posted the cover art and sound samples for our upcoming release of songs by recording pioneer, Dan W. Quinn, called Anthology: The King of Comic Singers, 1894-1917. If you haven’t had a chance to look and listen, you can do so here. We’ve done a lot of original research for this project and … END_OF_DOCUMENT_TOKEN_TO_BE_REPLACED →
posted: March 26, 2015

As many of you know, especially those of you trying to hunt down those choice Paramount blues sides from the late ’20s, a record doesn’t have to be old to be rare and desirable. It’s just a matter of whether the maker of the record stayed in business long enough or had any kind of … END_OF_DOCUMENT_TOKEN_TO_BE_REPLACED →
posted: March 19, 2015

Dan Quinn, Part II: How do you whittle thousands of tracks down to 30?

In last week’s (inaugural) post about our upcoming Anthology CD of Dan W. Quinn, we included a link to the track list on our website. If you didn’t see it or didn’t have time to follow it, the tracks are here below with glosses on the selections and some rationale for inclusion. Archeophone’s Anthology series … END_OF_DOCUMENT_TOKEN_TO_BE_REPLACED →
posted: January 27, 2015

What’s old is new, and what’s new is old. Welcome to the inaugural edition of “Archeophone Outtakes,” a new blog from Archeophone Records. For more than 15 years, we have striven to bring America’s earliest recorded history into the present, making the sounds of the late-19th and early-20th centuries fresh and compelling for a modern … END_OF_DOCUMENT_TOKEN_TO_BE_REPLACED →
posted: January 20, 2015