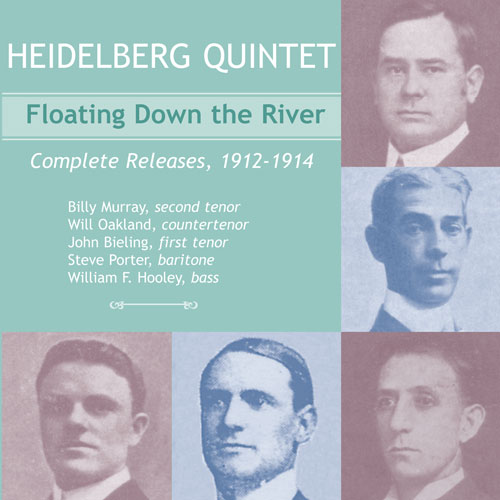 Complete releases from 1912-1914, with two bonus tracks from 1910 before the ensemble took the name of the Heidelberg Quintet; 26 total songs, including three Edison 4-minute cylinders. Lead vocals by Billy Murray and countertenor Will Oakland. Features a 24-page booklet with previously unpublished notes on the group and a complete reprinting of the hitherto forgotten "Reminiscences of Early Talking Machine Days" by first tenor John Bieling, from The Talking Machine World in April 1914. List price: $16.49

Get ready for the most amazing harmonies and most intricately arranged ragtime vocals you have ever heard. Here, for the first time ever, are the complete releases by the first supergroup of the acoustic recording industry. The Heidelberg Quintet combined the singular talents of the hottest star of the day, Billy Murray, with a top-notch performer whose fame was rapidly growing because of the amazing high notes he could reach with his natural voice—Will Oakland. Together with seasoned veterans John Bieling, Steve Porter, and William F. Hooley, these singers laid down harmonies that latter-day barbershop quartets dream of!

Roots in the Minstrel Stage

Will Oakland and Richard Jose were the most famous countertenors of a century ago, and they were already a dying breed. Both performed in minstrel shows, arousing wonder among audiences by the peculiar beauty of their high registers. Oakland was with the Cohan and Harris minstrels, and he is reputed to have discovered Al Jolson on one of his early tours with the troupe. Word got around quickly that Oakland was a sensation, and he began recording for Edison in 1908, performing tear-jerker sentimental ballads like “Just Before the Battle, Mother” and “White Wings,” which were his typical fare on stage. Two such numbers, “In the Gloaming” and “Stick to Your Mother, Tom,” Oakland recorded with the American Quartet before the group formally coalesced into the Heidelberg Quintet. These two beautiful renditions open our CD.

Recording executives must have liked what they heard and decided to try something new: a quintet with carefully arranged parts to take advantage of Oakland’s unique gifts while still allowing Murray to shine through. Thus, in July 1912, the Heidelberg’s first offering was “Under the Love Tree.” The difference is apparent; no longer do we have a lead singer who is “decorated” by the back-up quartet. Instead, we have an intricately designed vocal arrangement with beautiful textures, harmonic coloring, and spacing. No serious attempts at recording a quintet had been made to this date (other than one cylinder for Edison by the Knickerbocker Quintet), making the achievements by the Heidelberg Quintet truly momentous in the history of popular vocal recording.

With the help of ragtime composer George Botsford (“Black and White Rag,” “The Grizzly Bear,”) soon the Heidelberg Quintet was recording the catchiest—and most demanding—vocal ragtime of the period. Songs like “I Want to Love You While the Music’s Playing,” “Ragtime Regiment Band,” and “Floating Down the River on the Alabam'” are ragtime masterpieces. But even on traditional material, such as “Emmett’s Lullaby,” the Heidelberg left their distinctive stamp.

Lazy Days on the River, Fun in the Sun

Owing to Oakland’s vaudeville commitments, the Heidelberg Quintet made records only during the late spring and summer of 1912, 1913, and 1914. The music echoes the season. The themes center around languorous days in the old South, nights underneath the June moon, or trips to the sea. The group’s two most popular songs, “By the Beautiful Sea” and “Waiting for the Robert E. Lee,” are just this sort of song. You will want to grab your beach towel and boom box and head off to where the water flows!

Fans of ragtime and barbershop quartets, take note: Floating Down the River by the Heidelberg Quintet is a must-have CD for your collection. It represents a “missing piece” in understanding and appreciating the story of recorded ragtime.