Lost Sounds: Blacks and the Birth of the Recording Industry, 1891-1922
Various Artists 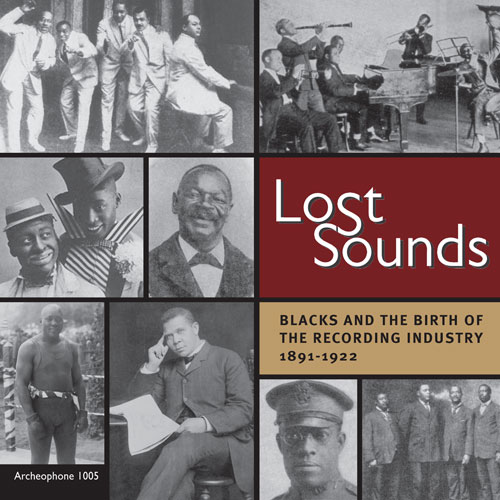 Fifty-four tracks by 43 artists, and 60 pages of in-depth commentary and analysis: Lost Sounds is a monumental achievement that stretches back to the faint beginnings of commercial recordings and travels to the brink of the Jazz Age to trace the contributions of black artists on American records. Sometimes noisy and raucous, sometimes quiet and austere, these recordings demonstrate the deep involvement and lasting influence of African Americans in the nascent recording industry. List price: $29.99

Fifty-four tracks by 43 artists, 60 pages of in-depth commentary and analysis, and 1 Grammy Award for Best Historical Album: Lost Sounds is a monumental achievement that stretches back to the faint beginnings of commercial recordings and travels to the brink of the Jazz Age to trace the contributions of black artists on American records. Sometimes noisy and raucous, sometimes quiet and austere, these recordings demonstrate the deep involvement and lasting influence of African Americans in the nascent recording industry.

From Book to Audio

First published by the University of Illinois Press in 2004, Tim Brooks’ mammoth Lost Sounds brought before the world the stories of pioneering black recording artists who had been consigned to permanent obscurity. Now Archeophone gives these artists their voice on this ambitious two-CD set. Every major artist covered in the book (except for one whose recordings have never been found) and several minor ones are represented here. Never before has such an overview been attempted, and many of the recordings found here have literally not been heard in over 100 years.

The release of Lost Sounds is nothing short of historic. You have heard of many of these singers, musicians, and public figures, but you probably haven’t heard the sonic documents they left behind. Here for the first time is Thomas Craig, “the colored basso,” stage star Opal Cooper, boxer Jack Johnson, and Tuskegee Institute founder Booker T. Washington. Also featured are five operatic performers who made records for Broome Special Phonograph Records, ca. 1919, and who led distinguished musical careers: Harry Burleigh, Edward Boatner, Florence Cole–Talbert, Nathaniel Dett, and Clarence Cameron White. Lost Sounds also includes one of the ultra-rare personal records made by Roland Hayes, “Vesti la giubba,” that helped him jump-start his career.

With the help of gracious collectors we have also unearthed rarities whose importance cannot be overstated. Here for the first time is heard an African-American vocal group from 1895: the Oriole Quartette doing “Brother Michael, Won’t You Hand Down that Rope?” Also included is one of the earliest minstrel records in existence; from 1894, it’s Spencer, Williams & Quinn’s Imperial Minstrels doing their Minstrel First Part and featuring George W. Johnson’s great “Laughing Song.” Those who have heard Cousins and DeMoss doing “Poor Mourner” for Berliner in 1898 have a treat in store with their rousing rendition of “Who Broke the Lock” also from 1898. These guys were making rock records before anybody knew what that meant.

Four distinct musical genres emerged when the recordings were laid out: Vocal Harmonies, Minstrel & Vaudeville Traditions, Aspirational Motives, and Dance Rhythms. The two CDs are arranged according to these themes, with a full trajectory of nearly 30 years’ worth of material covered in each section. Several musical superstars are represented: Bert Williams, Wilbur Sweatman, Jim Europe’s bands, and W. C. Handy. But other lesser-known pioneers are here too. Under the “Vocal” section come the celebrated Unique Quartette, here heard on the superior-sounding “Mamma’s Black Baby Boy” from 1893 and “Who Broke the Lock” from about 1895 (comparing the two versions of the song raises questions about vernacular performances from the 1890s). The “Minstrel” section takes us, meanwhile, from rough “coon” songs, introduces Williams and Walker, and ends with “Great Camp Meetin’ Day,” by Noble Sissle, one-half of the most popular black team of the 1920s. The “Aspirational” section chronicles efforts by black artists to overcome circumstance and establish themselves among the world’s “serious” music, seen for instance in “Swing Along,” by Will Marion Cook’s Afro-American Folk Song Singers. In the “Dance” genre, we have great performances by Clef Club members on the Europe Society Band’s “Down Home Rag” and the Joan Sawyer Orchestra’s version of “Bregeiro,” led by Dan Kildare. One standout is one of Eubie Blake’s first records, “Sarah from Sahara,” performed by the Blake Trio in 1917. Also featured is the rarely reissued Ford Dabney Band, doing the infectious “Camp Meeting Blues” from 1919.

Of special interest on Lost Sounds is George W. Johnson, the first black man to record. “Lost Sounds” includes all eight of his extant recordings, from the 1891 North American cylinder of “The Whistling Coon” and “The Laughing Song,” which features unusually early ragtime piano accompaniment, to “The Whistling Girl,” “The Laughing Coon” and the ultra-rare “Carving the Duck” from 1903—a record that had not surfaced until earlier this year. Lesser-known and uncommon recordings by Johnson are his whistling solo for Berliner of “The Mocking Bird” and his speaking cameo on Len Spencer’s “Merry Mail Man,” the last original routine the elderly Johnson appeared on.

With notes by Tim Brooks and David Giovannoni, the accompanying 60-page booklet is nearly worth the price alone. Beautifully illustrated, and featuring many rare photos, the booklet (it’s really a book!) brings the music and the actors alive. We’ve included a general introduction, four genre introductions, selected mini-biographies, copious track notes and lyrics on selected songs, along with a handful of other special features. This stunning book is sure to make Lost Sounds a deeply rewarding experience for you.

A Testament to the Power of Preservation

Lost Sounds makes a persuasive case for preserving old recordings before it is too late. Some of these newly-rescued sounds bear the marks of their tortured history, while others somehow made it to the present day surprisingly pristine. Archeophone is proud to be at the vanguard of these preservation attempts, and we encourage other collectors, as they enjoy this sonic history that was nearly lost, to take the time to preserve their old recordings and to share them with the world. Archeophone stands ready to aid you in your efforts!