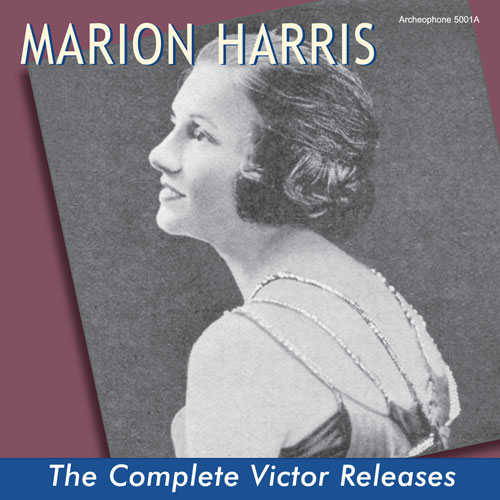 Second edition (2005), featuring newly remastered sound, one bonus track, and expanded and enhanced 20-page booklet. 22 selections, recorded between 1916 and 1919, including one rejected take from 1917, and two final selections from 1927. Marion Harris was the first female vocalist to record songs with "jazz" and "blues" in their titles; she exemplifies the transition from the old school of gutsy ragtime singing to the newer, softer kind of delivery that was typical of female vocalists of the 1920s. List price: $16.49

The legendary early recordings of pioneer artist Marion Harris are now available in a second edition! Now with completely remastered sound and an expanded 20-page booklet, The Complete Victor Releases features all of Ms. Harris’ releases from 1916 through 1919 and even boasts a bonus track on this second edition: a rejected take of one of her most famous numbers, “When Alexander Takes His Ragtime Band to France.” The collection closes with the two recordings Marion made when she returned in 1927 to the label that launched her career a decade earlier.

Later known for stage and film appearances, Marion Harris gave definitive performances of such classics as “St. Louis Blues,” “Look for the Silver Lining,” and “Tea for Two.” But it was her early recordings for Victor that many feel was her most important and pioneering work. Born Mary Ellen Harrison, Marion was only about 20 years old when she first walked into a Victor studio in 1916, and during her three years there, she sang blues and jazz almost exclusively, being the first female to record songs with the words “jazz” and “blues” in their titles, such as “When I Hear that Jazz Band Play” and “Everybody’s Crazy ‘Bout the Doggone Blues.” The Complete Victor Releases is the first compact disc to gather all of her Victor sides, along with one rare rejected take.

Harris began her career singing in the tradition of the “coon shouters” of old, like Sophie Tucker. But she emerged as one of the hottest female jazz singers of the age, putting her stamp on future classics, such as “I Ain’t Got Nobody Much,” her signature song, “A Good Man Is Hard to Find” (later a big hit for Bessie Smith) and “After You’ve Gone,” which was among the first versions of the Creamer and Layton standard, and which remains, by many accounts, the strongest recording of the classic.

Songs of World War I

When Marion Harris recorded songs about African Americans enlisting to fight in the Great War, her press made much of her ability to sing in a natural dialect, because she was from Kentucky. This is evident on “Good-Bye Alexander (Good-Bye Honey Boy),” which includes a long spoken routine in the middle of the song. Two other war songs show her versatility: the pathetic (and crude by today’s standards) “Mammy’s Chocolate Soldier” and the rousing “When Alexander Takes His Ragtime Band to France,” included here in two versions. It is illuminating to compare the rejected take with the released take to try and determine what technical and artistic problems the studio managers were reacting to.

Many of Marion’s songs of her early period are full of vigor, fun, and excitement. “I’m Gonna Make Hay While the Sun Shines in Virginia,” a song first popularized by Sophie Tucker, is a great romp. “They Go Wild, Simply Wild, Over Me” is another classic that receives its definitive reading from Harris. Maybe most peculiar of all is “I Wonder Why,” Marion’s duet with Billy Murray. Victor thought enough of their young singer to pair her with their biggest star, performing this song from Jerome Kern’s musical comedy, Love o’ Mike.

Harris’ signing of an exclusive contract with Columbia in 1920 was an event. When she signed with Brunswick in 1922, the label featured her on the cover of their late-year supplement. So it was as a seasoned star in full maturity that Harris returned to Victor in 1927 to record two songs, “The Man I Love,” by George and Ira Gershwin, and “Did You Mean It?” Marion’s version of the former was one of the first to be released, put out by Victor in March 1928. With beautiful accompaniment by violinist Eddie South and pianist and accordion player Phil Baker, the veteran singer is heard on these last two selections in full possession of her powers, a towering figure whose influence on other singers of the period, such as Ruth Etting and Annette Hanshaw, is incalculable.

Bringing You the Best

Along with improved sound, the package contains expanded notes, including new revelations about Marion’s early life—we may have discovered why researchers have been frustrated in their attempts to trace her to Henderson County, Kentucky. An outstanding CD is now even better with this second edition of Marion Harris: The Complete Victor Releases. If you liked it the first time, you’ll love it the second time, and if you haven’t gotten it yet, now is the time to get your copy!