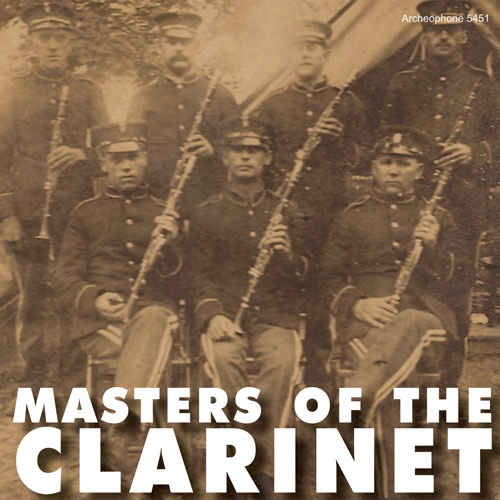 Featuring 32 rare tracks that go all the way back to 1892, Masters of the Clarinet, 1892-1920 tells the story of the clarinet's instrumental role in the early recording industry. The set includes a 24 page booklet with notes by clarinet expert Stan Stanford and rare images and photos. List price: $16.99

It was the last woodwind to become a major part of the modern orchestra, and by the end of the 19th century, the clarinet had become a composer favorite in chamber music arrangements. Its pleasing tone and relative ease of reproduction made the “clarionet” a natural choice for solo instrumentals in the acoustic recording environment. Masters of the Clarinet, 1892-1920 showcases the men–many from Sousa’s and Gilmore’s bands–and the music that made the clarinet so important to the growth of the infant industry. Make no mistake: the performances are priceless, but so are the specimens–many of these records are among the rarest Archeophone has released.

Clarinetist and professor Stan Stanford walks us through the history of the clarinet, noting how the clarinet substituted for strings in community bands even as it became a staple of the orchestra–and the recording studio. Stanford offers many compelling theories for these developments, gives an overview of the clarinet’s recorded history, and offers brief biographical sketches of the artists on the CD, assisted in his research by many of the players’ descendants.

Some of the Oldest Extant Recordings

The clarinet was recorded for commercial purposes right from the birth of the industry, with Henry Giese making records for Edison’s North American Phonograph Company. One of Giese’s stablemates, R. K. Franklin, is heard here in two North American selections from March 1892–two of the oldest extant recordings in the world. Franklin’s “Air and Variations, No. 2” and “Ballet Music from Mathias Sandorf” show remarkable mastery, as well as a breathtaking purity of tone and clarity. Another North-American-era cylinder, “Il Trovatore,” performed by an unknown soloist (see if you can make out the name in the obscured announcement), demonstrates the vexing job the arrangers had in trying to scale down the best-loved operatic arias to fit the two- to three-minute limitation of the recording medium.

Discs by Berliner’s Gramophone company are sought after by collectors not because of their pristine sound, but because of the cutting-edge technological experiments they represent–at least for the 1890s. Clarinets cut through the noisy acid-etched mastering process as well as anything. Berliner was smart to get the most celebrated artists to come play into his horn: Felix Jardella, Joseph Norrita, August Stengler, and George McNeice among them. Jardella is heard here in three selections, Ethelbert Nevin’s “Narcissus,” Verdi’s “Miserere,” and “Clarionet Polka” (which is *not* the familiar “Clarinet Polka”). Norrita’s Berliner disc, “Andante Original,” bears the impressive inscription: “Sig. Norrita / Claronet Soloist SOUSA’S BAND” [sic]. But in Stan Stanford’s estimation, it’s August Stengler–with his nearly flawless reading of “Bolero Les Alsachiennes” and his skillful variations on “Old Folks at Home”–who is the most remarkable of all of these early performers. Stengler pairs with McNeice on “The Two Volunteers” and “Titl’s Serenade.”

The Clarinet Helps the Phonograph Come of Age

No question but that with the turn of the 20th century came improvements in recording technology by leaps and bounds. George McNeice’s talents are shown to great effect on a 1900 cylinder of “My Old Kentucky Home,” while Theodore Pusinelli’s Zonophone recording of “Cara Nome” shows how good early discs can sound. But the best reproductions here are those by the man who made more acoustic-era clarinet recordings than anyone else: William Tuson. He started with Edison in the 1890s, made discs for Berliner, and returned to Edison in the first decade to make cylinders of sonic brilliance and lasting beauty. There are familiar songs, such as “Sally in Our Alley,” “Nellie Gray,” “Heart Bowed Down,” and “The Minstrel Boy,” along with selections from serious works, such as “Gavotte from Mignon” and “Cavatina from Robert le Diable”; setting each each piece apart are Tuson’s masterful variations. With fellow clarinetist George Rubel, Tuson offers the tuneful “Two Little Bullfinches Polka.”

Some repertoire pieces were apparently audience favorites, because versions by several artists come down to us from the decades. You be the judge: who is the greatest master? On “Comin’ Thro’ the Rye” is it George McNeice, or Theodore Pusinelli, or Louis H. Christie? What about “Blue Bells of Scotland”? Is the version by Pusinelli or the one by Christie superior? Or, compare the 1892 Franklin version of “Ballet Music from Mathias Sandorf” with Tuson’s dramatic version from ca. 1903. Better, or just different readings for different times?

Disappearance of a Once-Loved Artistry

As the 1910s wore on and jazz became the most popular music of the time, arrangements for clarinet–popular songs with variations, light classical fare and operatic arias–seemed to become quaint and less in demand. Jazz combos such as Earl Fuller’s Famous Jazz Band prominently included a clarinet player, but this was an entirely different milieu. Edison kept the old sounds alive the longest, and Masters of the Clarinet ends with recordings by Anthony Giammatteo and Frederick Brissett, who had long tenures with the Edison organization. “Maria Padilla” and “Fantasia for Flute and Clarinet from Simon Boccanegra” feature Giammatteo in duets with flutists Julius Spindler and Pietro Caso, respectively, while Ponchielli’s “Divertimento–Il Convegno” takes full advantage of the four-minute Diamond Disc format to showcase Giammatteo and Brissett. Unlike other pieces cut from the orchestral repertoire, the “Divertimento” was written for two clarinets. It is a stunning performance, possibly the most brilliant and idiomatic piece on the CD, and fitting conclusion to an important chapter in the history of recorded music.