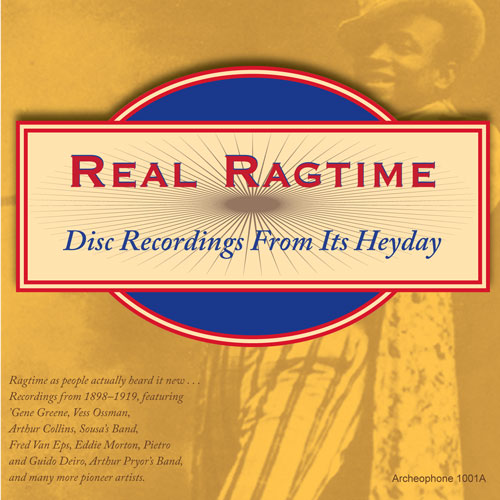 Now available: the second edition of Archeophone’s first release, RealRagtime. This new edition features fully remastered tracks, expanded notes, and a bonus selection. The sound of these 100-year old records is better than ever, and our understanding of the historical and musical significance of the songs is enhanced by added commentary from noted musician and scholar David Sager. Also, notice that the new Real Ragtime now features the original version of “Dill Pickles Rag” by Chris Chapman from 1908 and a bonus track, “Sugar Plum,” by mandolin player Samuel Siegel, along with Roy Butin on harp-guitar.

Where are the pianos? Where is Scott Joplin?

If you want to buy a collection of ragtime music these days, you’ll find contemporary pianists and combos performing lively interpretations of classic rags. We’re offering something different: the actual ragtime disc records that common people were buying during the time of the genre’s heyday, spanning roughly 1893-1917. Real Ragtime features 29 tracks recorded between 1898-1922, which show that people at home were not listening to piano ragtime as much as we might have thought!

Wow! There are a lot of banjo numbers here!

While the major labels did record and release piano solos during the pioneer era of the industry (1890s-1920s), they were comparatively rare and not usually ragtime numbers. Instead, ragtime was performed by marching bands, banjoists, popular vocalists, and other unusual instruments such as accordion and xylophone.

I didn’t know there were so many vocal rags!

Along with the banjoist Ossman, Arthur Collins is probably the most signicant of early recorded ragtime performers. At a time when “coon songs” were nearly synonymous with ragtime, the songs Collins sang were most popular, such as “When Uncle Joe Plays a Rag on His Old Banjo” (with Ossman) and “You’re Talking Rag-Time”—the latter a rare Berliner record from 1900.

That’s not all: Archeophone presents some of the most famous ragtime singers—’Gene Greene (“The Ragtime King”) performing “Ruff Johnson’s Harmony Band,” Eddie Morton doing “Wild Cherry Rag,” and one of our favorites, “Everybody Rag with Me,” by the American Quartet, led by Billy Murray.

Who would have thought marching bands could cut loose!

Arthur Pryor, chief arranger for Sousa’s Band, led the way. We have Pryor’s “Canhanibalmo Rag” and “The King of Rags,” along with “Booster,” played by the Victor Military Band. Try to sit still! Plus there are several others, including “Hu-la Hu-la Cake Walk” by Sousa’s Band (from 1901).

Yes. Just listen to Pietro Deiro’s “Hungarian Rag.” This demonstrates how well-suited the accordion really was for recording ragtime into the acoustic horn. It also witnesses to another ragtime phenomenon: classical motifs “ragged up” by the performers. Deiro’s subject is Franz Liszt’s “Hungarian Rhapsody No. 2.” We’ve also got Pietro’s brother Guido showing off on “Deiro Rag,” from 1912.

But really, all the tracks here on are virtuoso performances. You will understand when you hear Real Ragtime why the listening public was content to stay at home—and not go down to the saloon to hear player pianos.

By the way, Scott Joplin recorded some piano rolls, but he never made a disc or cylinder recording.