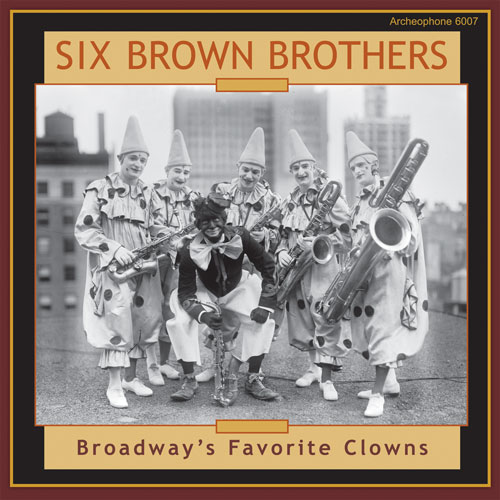 With 24 tracks, Broadway's Favorite Clowns features the selections not included in our first collection of the Six Brown Brothers' work. Brown Brothers expert Bruce Vermazen again provides the notes and research, and the set is packaged with a 24 page full-color booklet with rare photos and illustrations. List price: $16.99

Broadway’s Favorite Clowns is Archeophone’s second collection of recordings by Six Brown Brothers, picking up where Those Moaning Saxophones (ARCH 6002) left off. That first collection emphasized the Browns’ output of rags, one-steps, and popular songs to draw a portrait of them leading the vanguard of the saxophone craze that spread from the U.S. to the rest of the affluent world in the 1910s. This second collection paints a more rounded likeness of the Browns’ stage repertoire, from marches and waltzes to oriental one-steps, an habanera, and an operatic transcription. Once again, leading us with his insightful notes and collection of precious photos and artifacts is Bruce Vermazen, author of That Moaning Saxophone: The Six Brown Brothers and the Dawning of a Musical Craze (Oxford, 2004).

All four cylinder offerings by the Five Brown Brothers for the U-S Everlasting company are included. These uncommon celluloid recordings are highly sought after today, and with good reason, as they show the Brothers’ activity while playing in the Ringling Brothers Circus. The first cylinder, “Tramp, Tramp, Tramp,” is chiefly a solo outing by Tom Brown with support from his bandmates; it is a set of variations on the Civil War tune, demonstrating the kind of pop virtuosity demanded of every musical act of the day. “Bull Frog and Coon Medley” differs from the version on Those Moaning Saxophones by having a more humorous ending, while “Independentia and Billboard Medley March” exemplifies (briefly) the practice of circus bands having to stitch together different pieces to provide a continuous soundtrack to the big top’s spectacle. “American Patrol” is the only four-minute cylinder the Browns made.

By late 1911, the group expanded from Five to Six Brown Brothers with the addition of the oldest brother, William. Success on the Orpheum circuit and two seasons with Primrose and Dockstader’s Minstrels helped the Browns catch the attention of Broadway producer C. B. Dillingham, who signed them for Montgomery and Stone’s Chin Chin. It played for an unusually long period of some 15 months (1914-1915), during which the Browns had eight Victor sessions. Releases included the old favorite, “La Paloma,” another version of “Independentia–Medley March,” “Pussyfoot March,” and “Saxophone Sobs.” Most interesting are “Down Home Rag,” which features several touches distinguishing it from other contemporary straight versions of Sweatman’s future classic, and “Rigoletto Quartet,” transcribed for the Browns uniquely by Guy E. Holmes, himself a saxophone pioneer.

Mystery surrounds the four sides made by Fred Brown (solos with orchestra accompaniment) for Columbia in 1916. These were the first sax recordings by the company in four years, and it’s not clear how Fred was induced to stray from the contractual obligations of the Brothers’ fold. The first two, however, “The Sunshine of Your Smile” and “Somewhere a Voice Is Calling,” were released under the name “Fred Allen.” The final two, “Kiss Me Again” and “Love, Here Is My Heart,” were released under Brown’s real name. Fred plays expressively, with a lot of vibrato and loud-soft variation, like a singer in recital or a solo cellist.

Chin Chin‘s 1916-1917 tour ended abruptly upon David Montgomery’s death in April 1917. The Browns went back to recording, putting out a prodigious amount of new material. “Comedy Tom” is from this period, while the bouncy “When Aunt Dinah’s Daughter Hannah Bangs on That Piano” and “Chasing the Chickens” date from 1918, when the Six Brown Brothers had their own episode, called “Clowntown,” in Dillingham’s new vehicle for Fred Stone, Jack o’Lantern.

Emerson and the Midnight Frolic

During the summer of 1919, the Browns starred in Ziegfeld’s Midnight Frolic at night, and during the days they made several records for the upstart Emerson label. Emerson tried to muscle in on the business of the big boys, whose laterally-cut records were the industry standard, and the newcomers who were competing with vertically-cut records by making a record that could be played both ways. It didn’t work, and the sound is correspondingly rougher. “Carolina Sunshine” and “The Concourse March” are good fun and generously long records nevertheless, while the great dance number “Peter Gink” appears again. “Twelfth Street Rag” is one of the band’s hottest sides, which features the seldom-heard first strain. Closing our set are ca. 1920 recordings of “Fatima,” “Lazy Jazz Waltz,” and “Alexandria,” a catchy “oriental” one-step from what seems to have been a very exotic Broadway show, Aphrodite, that ran from November 1919 through April 1920.

With that, the Brown Brothers ceased making records, and with this collection, Archeophone completes its two-CD compilation of the complete recorded output (sans alternate takes) of this one-time Broadway clown institution.