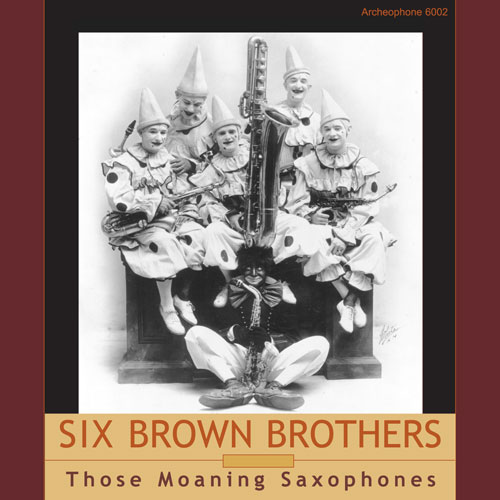 26 tracks, recorded between 1911 and 1927, spanning the entire career of this saxophone troupe that started the "saxophone craze" of the 1910s, and comprising roughly half of their recorded output. Beautiful 24-page, full-color booklet contains extensive notes by Brown Brothers expert Bruce Vermazen, and it includes uncommon illustrations from Vermazen's personal collection. Of special note is the inclusion of three previously unreleased tracks, particularly one in which leader Tom Brown performs his legendary "abandoned-bride" routine--a humorous interplay between a full orchestra and the consummate saxophonist showing his full bag of tricks. List price: $16.99

Other than a copycat act, the Six Brown Brothers were the only saxophone ensemble to make commercial records between 1911 and 1917, and they ushered in the “saxophone craze” that had the country entranced in the mid-1910s. From the group’s start in 1908 playing in the Ringling Brothers’ circus until their final breakup in 1933, the shifting personnel of the outfit always included leader Tom Brown and at least one of his five brothers. On records for U.S. Everlasting, Columbia, Victor, and Emerson, the Brown Brothers set feet a-tapping to their joyous sound and comical routine. The tracks on this CD represent roughly half of the Browns’ issued output, along with three extremely rare, previously unreleased selections. The beautiful 24-page full-color booklet is packed with rare graphics and detailed notes by expert Bruce Vermazen about the career and records of the Six Brown Brothers.

Tom Brown bought his first saxophone in 1904, when one was likely to hear the instrument only in military or large circus bands. A decade later, show-business newspapers were talking about a “saxophone craze.” The Brown Brothers were at the helm of the craze, centering their vaudeville act around the beautiful, distinctive voices of their saxophones—and the funny noises (squeaks, laughter, clucking, and sobs) they could make, such as on “The Bullfrog and the Coon.” Before long, entire sax-orchestras were formed, and sales of saxes skyrocketed. When jazz established itself by the 1920s, the saxophone would be a staple of jazz bands. This CD documents the meteoric rise of the sax in American music, its versatility and tone, and the extraordinary skill wielded by the leaders of the sax craze: the Six Brown Brothers.

The Brown Brothers put their consummate abilities to use on the popular music and trends of the day, especially ragtime, and their performances, filled with clever twists and turns, always bring a laugh. At least one record, “That Moaning Saxophone Rag,” was a huge seller, written by Tom Brown himself. “Peter Gink” is by George L. Cobb, who made a career out of “ragging” the classics (as he did with “Russian Rag”, based on a piece by Rachmaninoff)—in this case the object of his adaptation is Grieg’s opera Peer Gynt. “Smiles and Chuckles” is one of the Six Brown Brothers’ best-known records, and although it was billed as a “Jazz Rag,” its sheet music calls it a “rag one-step.” Either way, the Brothers show their mastery of F. Henri Klickmann’s syncopations. Klickmann was a prolific arranger and composer who improved the Brothers’ sound considerably during his long tenure as chief orchestrator for the act.

The Browns could tear it up on a catchy dance tune such as “My Fox Trot Girl,” or they could ride the jazz and blues wave on songs like “Missouri Blues” with the best of them. But they made innovative contributions to the sax art that have lasting and historical significance. For instance, the dominant bass sax on “If a Wish Could Make It So” evidences the extent to which the Brothers boldly put that peculiar voice in their act. Perhaps the most stunning example of Tom Brown’s art on the CD has to be heard to be believed: it is on the 1927 offering, The Original Six Brown Brothers, Saxaphonic Jazz Masters and Orchestra, in the middle of which Tom plays the role of an abandoned bride having a musical “conversation” with the band in snatches of tunes that would have been well-known to his audience. You can hear Tom “talking” through his instrument in this incredible testiment to the talent of the Six Brown Brothers’ leader.