The Complete Hit of the Week Recordings, Volume 3
Various Artists 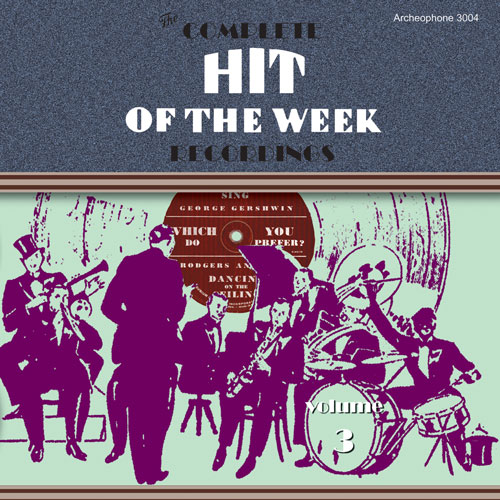 Volume 3 of The Complete Hit of the Week Recordings picks up where Volume 2 left off and features 51 tracks including the Durium 5 minute records and a number of rare advertising records. The package includes a 24-page booklet with complete discographical information, an essay about the Durium Corporation and notes on the recordings. List price: $31.99

Just released: the third two-CD volume in an eventual four-volume series collecting the complete weekly output of the Hit of the Week franchise, along with rare test and promotional records from the parent Durium Corporation. Hit of the Week records, made with the patented Durium formula on top of a cardboard surface, were the cheapest and best-selling records at the outset of the Great Depression. This third collection picks up where Volume 2 left off and includes lots of advertising records as well as the 5-minute Duriums.

On August 13, 1931, the Durium company released the first regular-series 5-minute Hit of the Week issue, “Pardon Me Pretty Baby,” by Sam Lanin’s Orchestra. The arrangers hadn’t quite figured out how cleverly to stretch standard 3-minute dance numbers into the longer format, so the first several “microgroove” records, like “Just One More Chance,” will simply repeat a chorus or import a strain from another song, as on “I’m Keepin’ Company,” which borrows (seemingly randomly) from “Strolling Through the Park One Day.” Durium realized it would quickly need to find a better way to give a value to its customers.

The answer was found by October 8, 1931, when Irving Berlin’s “Me” was presented with a standard arrangement (of about three and a half minutes) and was augmented by Lanin’s band playing the fight songs of Princeton and Yale to finish out the five minutes of recording time. This padding of new releases with public-domain songs meant Durium could keep costs low as it tried to keep its financial head above water. The idea caught on, and new versions by Phil Spitalny’s band of “Shine on Harvest Moon” and “Oh Susanna” (sung by Helen Rowland) and “She’ll Be Coming ‘Round the Mountain” (singing by the Eton Boys) were used to fill out the repertoire. Durium continued to draw upon a number of university fight songs to conclude their records, including Notre Dame’s Victory March and a medley of Illinois Loyalty and Michigan victory. These medleys between teams with rivalries ensured sales to both sets of fans.

Ever wonder how companies pitched their products during the Great Depression? Volume 3 includes a number of advertising records and lets you hear for yourself. These special records promote a wide range of companies and products, including Redbook, Chevrolet, Westinghouse, Leonard Refrigerators, and Enna Jettick Shoes. Listen as Junior Home magazine promotes its character building qualities and suggests that the magazine would make a fine Christmas present. Again, mostly public-domain songs, such as “Banks of the Wabash” and “Silent Night,” accompany the ads so that Durium would not need to pay royalties. Some of these ad records are among the rarest of all Durium/Hit of the Week releases.

The hottest records on Volume 3 are by Freddie Rich’s Radio Orchestra, “Little Girl” and “It’s the Girl,” with personnel including Joe Venuti, Eddie Lang, Bunny Berigan, and Tommy Dorsey. Also found here, performing his only Hit of the Week, “Now That You’re Gone,” is Gene Austin (with the Hit of the Week Orchestra). And on December 24, 1931, even as sales were lagging, Durium announced that Rudy Vallee, whose face adorned the flip-side of his two (simultaneously released) issues, “A Faded Summer Love” and “You Try Somebody Else,” was to be a new Hit of the Week big gun. Eddie Cantor also makes an appearance, providing a vocal refrain on the timely and surprisingly bitter “Cheer Up”–the record that most dramatically takes on economic issues of the day.

With top-notch production and a 24-page booklet featuring rare graphics, a history of the Durium Corporation by Hit of the Week expert and discographer Hans Koert, and notes on the songs by co-producer and sound engineer Doug Benson, Volume 3 offers the quality and value you’ve come to expect from the Complete Hit of the Week series.

Share via
The Complete Hit of the Week Recordings, Volume 3
https://www.archeophone.com/catalogue/the-complete-hit-of-the-week-volume-3/