The Complete Hit of the Week Recordings, Volume 4
Various Artists 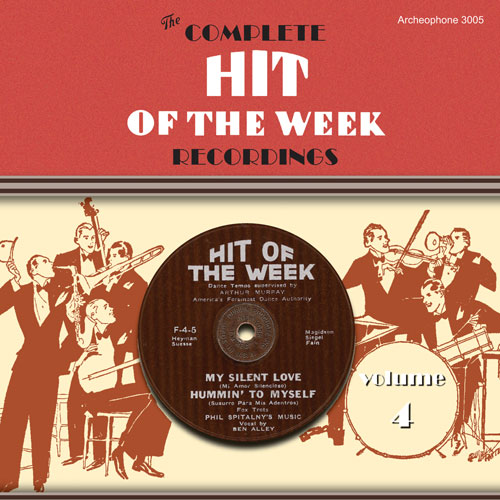 Volume 4 of The Complete Hit of the Week Recordings features 59 selections recorded between January and June 1932. The notes in the 24-page booklet follow the story of the Durium Corporation as they moved their focus from the weekly releases to the more lucrative business of producing advertising records, before eventually folding in 1934. List price: $31.99

New for 2011: the fourth and final volume of The Complete Hit of the Week Recordings, Archeophone’s celebrated series chronicling the full output of the Durium Corporation, which issued, every week for some three years during the Great Depression, the hottest hits of the moment on a cardboard medium lacqured with the patented Durium compound. They sold at newstands for the bargain price of 15 cents and were some of the best sellers of those turbulent years, from 1930 through 1932. The sound was surprisingly excellent, the records were flexible, and the artists employed (often pseudonymously) were in the top tier of their profession. Volume 4 follows the narrative of the Durium Corporation as they moved their focus from the weekly releases to the more lucrative business of producing advertising records, before eventually folding in 1934.

The weekly releases on Volume 4 pick up directly from Volume 3, beginning in January 1932 and concluding in June 1932. Some of the hits selected are among the all-time American classics, such as “All of Me,” “Kiss Me Goodnight,” “Paradise,” “Between the Devil and the Deep Blue Sea,” and “Lullaby of the Leaves.” The arrangements sound fresh and often innovative, benefitting from comparison with the major-label versions of the day. “Lullaby of the Leaves” is one such number, but so are the two parts of “The Wooden Soldier and the China Doll.” Part 1 plays it fast, part 2 slows it down.

Phil Spitalny’s Music is already well-known to Hit of the Week connoisseurs. Spitalny’s at his best here, on “When it’s Sleepy Time Down South” (vocal by Helen Rowland), “Now’s the Time to Fall in Love” (with a clever vocal refrain probably supplied by the Eton Boys), Irving Berlin’s “Let’s Have Another Cup of Coffee,” and the last weekly Hit of the Week issue, which paired “My Silent Love” and “Hummin’ to Myself.” Rudy Vallee and His Connecticut Yankees are here again too, with the beautiful “Home” and “Was that the Human Thing to Do?” And Nick Lucas and His Troubadors supply Donaldson’s “An Evening in Caroline,” while Erno Rapee’s Orchestra give us “This Is the Mrs.” Perhaps most delightful of all is Morton Downey and his Camel (as in the cigarettes) Orchestra doing “Two Loves” and “My Mom.”

“Progress in Advertising” tells the story succinctly. Durium lent its brand to a revolutionary means of direct advertising: short, small records that could be put in the mail. Some of these were for manufacturing concerns such as Frigidaire with their “New Year’s Message,” Good Year with its “Frankie Takes Marge for a Ride,” and Mark Time’s “End of the Depression” ad for the Mark Time Switch. Others were locally based, as with the Ad for Iowa’s Association for Tax Justice. This collection domonstrates how any concern could successfully employ Durium’s unique product–from Chevrolet, to Pertussin (hope you’re not offended by the coughing!), Talens art supplies, the Deveaux Brush Co., Soisette Broadcloth, and Crisco’s sponsorship of the Mills Brothers. Now, don’t miss Amelia Earhart’s broadcast from the other side of the Atlantic!

Old Chestnuts and then Two for One

As we saw on Volume 3, Durium attempted to roll with changing consumer demands by introducing a five-minute disc format, allowing them to have one Hit of the Week and one old classic to fill up the time. This trend continues on Volume 4. “Sailing,” “After The Ball,” “Good Night Ladies,” “Ida,” and “The Merry Widow Waltz” are all here, the second part of their respective discs. But the practice soon ends, and for the last part of its existence the Durium company put not one but TWO weekly hits on one disc and began charging 20 cents. It would have been quite a bargain to get both “Between the Devil and the Deep Blue Sea” and “Happy-Go-Lucky You and Broken Hearted Me” by Ralph Kirbery and Orchestra, or “By the Fireside” and “Lovable” by Rudy Vallee’s orchestra, or both “Lawd, You Made the Night Too Long” and “Sharing” by the incomparable Andy Sannella and His Orchestra.

Just as with the first three volumes of The Complete Hit of the Week Recordings, expert discographer Hans Koert joins us with his insights on the last days of Durium, Doug Benson once again provides notes and superb transfers, and producers Richard Martin and Meagan Hennessey put it all into a lovely package that you will refer to time and again. The Hit of the Week story may be 80 years old, but it’s never sounded so alive as on this remarkable Archeophone CD.

Share via
The Complete Hit of the Week Recordings, Volume 4
https://www.archeophone.com/catalogue/the-complete-hit-of-the-week-volume-4/