The Pink Lambert: A Collection of the First Celluloid Cylinders
Various Artists 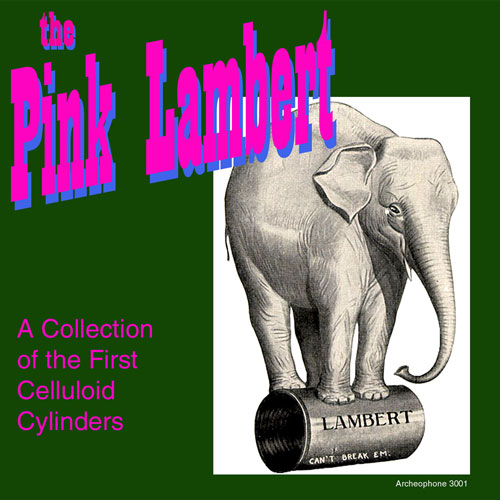 22 songs, sketches, whistling solos, and band performances from ca. 1902, with detailed notes in a 16-page booklet. Featured artists are the (original) American Quartet, Collins and Natus, Joe Belmont, Harry Macdonough, Sousa cornetist Otto Mesloh, and the Metropolitan Band. Includes original research into the operation of the Lambert Company of Chicago and 22 of the world's rarest records. A glimpse into the culture of 100 years ago. List price: $15.99

The Lambert Company of Chicago

With his invention of the celluloid cylinder, Thomas Lambert solved two problems with cylinder records: mass production and indestructibility. Ironically, his invention was short lived: lawsuits drove Lambert out of business within 5 years, and his cylinders are among the rarest of all records.

A treat for collectors—and an introduction for non-collectors

The Pink Lambert gathers 22 of these rare cylinders—the first time Lambert cylinders have ever been commercially released on CD—and packages them with liner notes relating the history of the Lambert Company, from the innovation of the celluloid cylinder to the lawsuits that tore the company down. The booklet also includes discographical information and images of the cylinders. And since the songs are all gathered from a single collection—these cylinders came as a lot of 22—you can see what records an average person might have listened to in 1902.

A Time Not Long After the Civil War

Songs from the war were still much in the popular imagination at the turn of the century, so that’s what the recording industry gave the public.  Selections included here, such as “Dixie Land,” “The Soldier’s Farewell,” “Tramp! Tramp! Tramp!” and “Sing Me a Song of the South,” were typical fare for all the record companies of the period. Listeners also wanted patriotic and traditional songs, and again, with numbers such as “War Song Medley” and “Wearing of the Green” Lambert demonstrated his desire to meet the public’s taste.

Bringing the Outdoors Inside

The earliest records—and these Lamberts are no exception—demonstrate to us the desire of pioneer artists to move beyond the limits of the medium.  They wanted to give us live-action scenes in our own homes in a compact two minutes of recording time.  You will be amazed by the elaborate scene-scapes of “Night Trip to Buffalo,” “Steamboat Leaving the Wharf at New Orleans,” “A Meeting of the Limekiln Club” (first performed by minstrel troupes in 1886), “Farmyard Medley,” and “Finnegan’s Birthday Surprise Party.”  (Check out Before Radio for more of this type of material.) Be warned, however:  some of these routines express racially derogatory views.  We urge historically-minded people of conscience to sift through this material and be critical of it, while understanding the age that produced it.

The wide variety of selections here attest to the innovative Lambert manufacturing process.  Pink Lamberts have a brilliance superior to wax cylinders of the day.  Listen to the cornet solos in “Wearing of the Green (with variations)” and “Emmet’s Lullaby,” two early band pieces, and witness the clarity of sound a recording horn could capture. For a true sense of the variety available on these early cylinders, listen to the whistling solos and bird impressions on “Bird Imitations,” and “The Mocking Bird,” the comic song, “McManus and the Parrot,” the hymn, “Lead Kindly Light,” and Harry Macdonough’s frolicking “In the Good Old Summertime.” In addition to presenting these rare cylinders, The Pink Lambert gives a solid representation of what the recording industry was releasing in its infant years.

Share via
The Pink Lambert: A Collection of the First Celulloid Cylinders
https://www.archeophone.com/catalogue/the-pink-lambert/