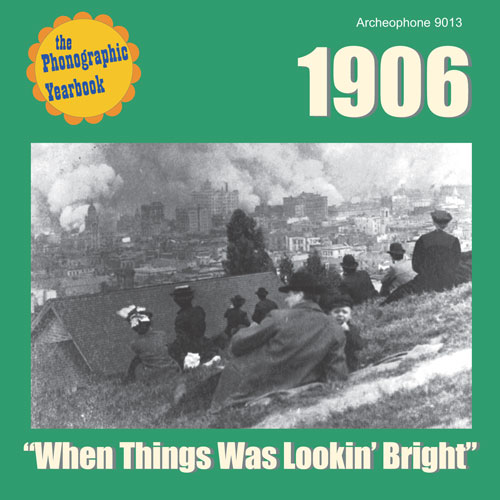 1906: "When Things Was Lookin' Bright" features 27 tracks from the year of the great San Francisco earthquake and the publication of Upton Sinclair's The Jungle. The CD comes with a generously illustrated 24-page full-color booklet, including notes on each of the selections and an interpretive essay on the events of the year. List price: $17.49

The U.S. suffered its worst natural catastrophe to date when a massive earthquake hit San Francisco in April 1906. What the shaking earth did not destroy, ravaging fires in the quake’s aftermath did. Coming at a time when dangerous irregularities in the country’s packing plants were uncovered in Upton Sinclair’s landmark book, The Jungle, it was obvious that the American infrastructure was unconsolidated and unprepared for significant disruptions. Archeophone’s Phonographic Yearbook, 1906: “When Things Was Lookin’ Bright,” shines a light on these events and provides a 27-selection soundtrack to the historical moment.

Many of the biggest hits of 1906 are also prominent members of the great American songbook, and none more so than Bert Williams’ moaning lament, “Nobody.” Our number-one all-time most requested song, “Nobody” perfectly sums up the feeling of helplessness felt by the victims of cruel fortune. More optimistically, “Wait ’Till the Sun Shines, Nellie” was so popular that major hit versions of it were scored by both Byron G. Harlan and Harry Tally. Similarly, the stirring ballad, “Love Me and the World Is Mine” was a hit for both Henry Burr and Albert Campbell–two of the early industry’s most versatile tenors who would later form a duet partnership.

Other enduring songs from 1906 were first introduced by female vocalists, making the year look like a breakthrough period for early women artists. Corinne Morgan beams on two numbers: “How’d You Like to Spoon with Me?” and “So Long, Mary!”, accompanied on both by members of the Haydn Quartet. Ada Jones was only a one-year-old act, featured here on the Edison cylinder of “Just a Little Rocking Chair and You,” along with Vesta Victoria’s hit of “Waiting at the Church,” and her duet with Len Spencer on “Peaches and Cream.” And Elise Stevenson marks one of her first major hits with partner Frank C. Stanley on “The Linger Longer Girl.”

By 1906 it was indisputable: Billy Murray was the first genuine hit personality of the fledgling acoustic-era industry. He had scored big hits already, but now he added huge pieces to his repertoire: Lew Dockstader’s “Everybody Works but Father,” the cowboy-themed “Cheyenne,” and George M. Cohan’s controversial masterpiece, “The Grand Old Rag.” Eager to capitalize on Murray’s success, Victor paired him up with their best vocal ensemble, the Haydn Quartet, for “Waltz Me Around Again Willie” to build on the franchise.

Strong instrumentals are to be had with the Arthur Pryor Band’s rendering of “On the Rocky Road to Dublin” and Vess Ossman’s take on “Buffalo Rag,” but what you’ll most remember on 1906: “When Things Was Lookin’ Bright” are the humorous selections. Bert Williams delivers a second classic on the year with “Let It Alone,” about the wisdom of minding your own business, while Edward M. Favor recites some of the most clever (and clean) limericks you’ll ever hear in “Fol the Rol Lol.” Meanwhile, Collins and Harlan mix it up with an oom-pah band on “The Leader of the German Band” and Bob Roberts will cause your head to spin around with “He Walked Right in, Turned Around and He Walked Right Out Again.”

Our 1906 Phonographic Yearbook captures the hopeful feeling of the times, but the historical moment of San Francisco’s April 1906 agony is especially etched into the beautifully recorded aria of “Forza del Destino—Solenne in quest’ ora” by Enrico Caruso and Antonio Scotti. The two opera stars had recorded it in Camden only weeks before they performed in Carmen at the Grand Opera House in San Francisco the night before the earthquake struck. A terrified Caruso swore he would never return to the Bay city–and he kept his promise.