1908: "Take Me Out with the Crowd"
Various Artists 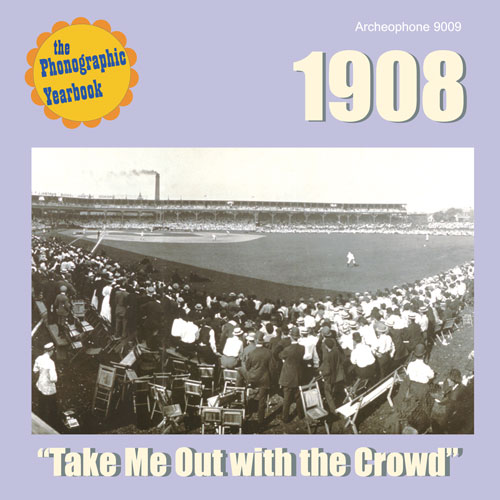 26 hits from 1908, the year that Fred Merkle's boneheaded play cost the Giants a trip to the World Series but sent the Cubs to their last series championship. Included here is baseball's anthem, "Take Me Out to the Ball Game" by the Haydn Quartet, along with 2 hits by the newly-christened Peerless Quartet and standards by the acoustic-era's great "teams": Collins and Harlan, Stanley and Burr, and Jones and Murray. Also features the collectible hit by Lucy Isabelle Marsh, "The Glow Worm" and hits by vaudeville greats Eddie Morton and Clarice Vance. Deluxe, full-color 24-page booklet features detailed notes on the songs, an historical essay, and rare graphics. List price: $17.49

The last time the Chicago Cubs won the World Series was in 1908, but had it not been for a questionable call during the regular season, they might not have made it to the Series at all. The most notorious mistake in all of baseball history was committed by “Bonehead” Fred Merkle of the New York Giants, who failed to touch second base as the winning run was scored by the Giants over the Cubs in September 1908. When the Cubs tagged the base as Merkle was headed to the dugout, the game was called a tie, and the teams faced a rematch in October, with the winner?which turned out to be the Cubs?getting the pennant. You couldn’t ask for a better backdrop to the introduction of baseball’s most famous song, “Take Me Out to the Ball Game,” which was waxed for the first time in 1908 by the Haydn Quartet, and which is included on a compilation for the first time here on Archeophone’s “1908” release.

The World Rolls On

As essayist Todd Avery notes in the CD’s accompanying booklet, 1908 was a year when events were outpacing the historian’s pen. American life was busy being busy, with advances in aviation, streets full of motorcars, and feats of construction. It seems natural that Americans would turn out to baseball parks for relaxation?but the season ended up as one of the most tense and exciting on record. The soundtrack for the historical season included songs that slowed down the pace, such as “The Glow Worm,” “I Love You So,” from The Merry Widow, and the old Stephen Foster gem, “Come Where My Love Lies Dreaming” by the newly christened Peerless Quartet.

Two sets of top-notch teammates had a big year in 1908, singing affectionate, even somewhat silly songs: Collins and Harlan and Jones and Murray. The latter pair are featured on three songs on this CD: “Cuddle Up a Little Closer, Lovey Mine,” George M. Cohan’s “When We Are M-A-Double-R-I-E-D,” and “Wouldn’t You Like to Have Me for a Sweetheart.” The former pair are featured with the rube song, “My Gal Irene” and “Down in Jungle Town,” a standout number of the “monkey craze” then current. The perennial favorite ragtime singer Arthur Collins is here on two other songs as well, the interminably catchy “Dixie Dan” and “Every Little Bit, Added to What You’ve Got, Makes Just a Little Bit More.”

The irresistible Billy Murray performs a great Cohan song, “Under Any Old Flag at All,” and for the Indestructible cylinder firm, he does the song most closely associated with George Walker of Williams and Walker: “Bon Bon Buddy” from the Broadway hit, Bandanna Land. Also featured is Elise Stevenson’s “Are You Sincere?” a late interpolation into The Wizard of Oz, which by 1908 had already been running for five years on Broadway. And then there are the vaudevillians?the irascible Eddie Morton, with his first hit, “Don’t Take Me Home,” and Clarice Vance, vaudeville’s stupendous “Southern Singer,” with her wry song, “I’m Wise.”

Vintage record enthusiasts will be thrilled by the inclusion of terrific numbers by Harry Maconough, one of the true acoustic-era greats who has never received his due. We’ve got the moving “My Dear,” and the rousing “Maxim’s” from Lehár’s The Merry Widow. Further, the outstanding baritone Alan Turner does “As Long as the World Rolls On,” and the more popular-oriented basso Frank C. Stanley teams with Henry Burr on “Rainbow,” and he leads the way on the Peerless Quartet’s “Rah, Rah, Rah.” These performers are the backbone of the acoustic recording era, and Archeophone is committed to preserving them. Once again, “1908” raises the standard for quality in rare records, intelligent commentary, and deluxe packaging, all at an incredibly low price.