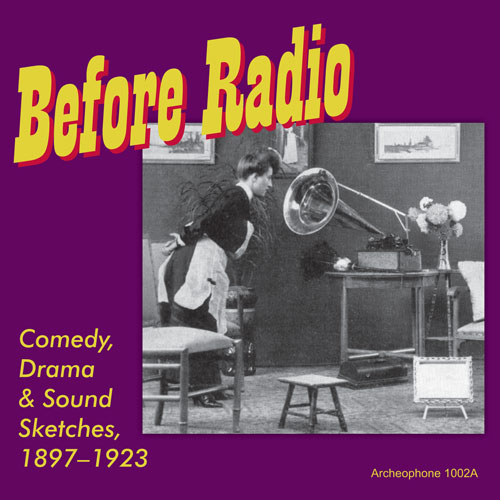 What did people listen to in the days before radio brought live action comedy sketches and serial drama into their living rooms?

Archeophone Records has the answer in Before Radio. With 27 tracks and an amazing total playing time of nearly 80 minutes, Before Radio is a one-of-a-kind product. No one that we know of has produced an album of comparable depth and length devoted to the comedy, drama, and sound sketches that were in popular demand during the acoustic period of the recorded sound industry.

Included here, for instance, are two orchestra “descriptives,” that is, sound effects with music aimed at imitating live-action dramatic scenes. There are also ensemble descriptives: listen to this realistic skit of a streetside New Year’s celebration, “New Years at Old Trinity” by the Haydn Quartet.

“Descriptive” records came to mean a variety of loosely-related non-song genres in the early days of recording. You will hear a broad representation of styles: from the Columbia Orchestra’s “Limited Express” to Tom McNaughton’s “The Three Trees,” and from Fred Duprez’s “Desperate Desmond” to the Haydn Quartet’s touching war-time drama, “‘Round the Campfire.”

Before Radio includes several examples of the comedian’s stock-in-trade, the monologue, such as “How Mother Made the Soup” by Charley Case (whose records are highly collectible today), “How I Got to Morrow” by Burt Shepard, and “Will Rogers Nominates Henry Ford for President” by the famous Oklahoman.

You will also find monologues by artists playing several roles, as Archeophone presents here the legendary “‘No News’ or ‘What Killed the Dog'” by Nat M. Wills, “Casey Putting His Baby to Sleep,” a well-worn but essential piece of history from 1897 by Russell Hunting, and “A Small Boy and His Mother at the Circus” by Mrs. Hardin Burnley.

A woman of extraordinary importance in early recording, Ada Jones, figures significantly in situational dialogues, such as “Zeb Green’s Airship,” with Len Spencer, and “The Piano Tuner,” with Steve Porter. Further examples include “Mosquito Trust” by Weber and Fields, “The Rube and the Country Doctor” by Byron Harlan and Frank Stanley (from an Edison Blue Amberol cylinder), “Down in Turkey Hollow” by the outrageous Golden and Hughes, and Len Spencer’s work with the animal-imitating Gilbert Girard on “Sheriff’s Sale of a Stranded Circus” and “The Vagabonds (Roger and I),” both from 1907.

The pioneers of the recording horn wanted us to feel like we were right there watching them. On Before Radio, every comic piece is its own dramatic scene, and whole companies pull out all the stops on “Spirit of ’76,” a Berliner disc from 1897 imitating a victory parade for General George Washington, “An Evening at Mrs. Clancey’s Boarding House” by the Victor Vaudeville Company, and “Train Time at Pun’kin Centre” by Cal Stewart with male quartet, one of Stewart’s last recordings.

We’ve thrown in a few twists as well. If you’ve never heard a genuine minstrel show before, you’ll be fascinated by “Old Log Cabin,” performed by Columbia Minstrels, Len and Harry Spencer in their ranks. You will be shocked as the tuneful “Pussy Cat Rag” by the Peerless Quartet with Ada Jones turns into a cat and dog fight. For good measure, there’s also “Cohen Telephones from Brighton” by the most successful of the “Cohen” comics, Joe Hayman, and the convincing “Vaudeville Specialty” by S. H. Dudley, from a 1901 Victor Monarch record.

Upon listening to Before Radio, you will be thrilled to hear the clarity of expression and originality that marked these early recordings. We’ve taken every trouble in our digital remastering to preserve the natural timbre of the voices. You may actually think that you’ve been listening to a radio variety show!