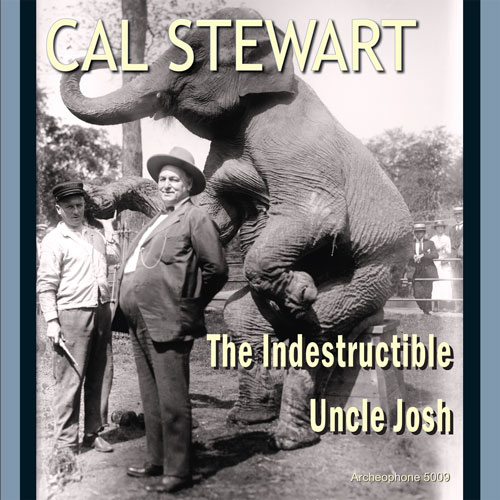 A humorist who spent 22 years waxing his Uncle Josh stories, Cal Stewart was the first performer whose stage appearances were celebrated by reference to his records rather than the other way around. In his famous role as "rube" Uncle Josh Weathersby, he entertained millions of listeners with tales of his antics both in New York City and at home in Punkin Center. The Indestructible Uncle Josh provides a snapshot of Stewart's repertoire at the height of his career, featuring all 25 of his 2-minute cylinders for the Indestructible company and a choice sampling of his work on U-S Everlasting cylinders. The package includes a 28-page booklet with notes by Stewart expert and scholar Patrick Feaster. List price: $16.49

A humorist who spent 22 years waxing his Uncle Josh stories, Cal Stewart was the first performer whose stage appearances were celebrated by reference to his records rather than the other way around. In 1908, Cal Stewart recorded 25 of his best routines for the Indestructible (celluloid) cylinder company of Albany NY. Together with a handful of cylinders made for the U-S Everlasting company, these show Stewart at the height of his career, allowing us to appreciate his repertoire at an advanced state of development. With a 28-page booklet of notes by Stewart expert, Patrick Feaster, and a clear, vibrant sound that gives us the chance to hear Stewart distinctly, The Indestructible Uncle Josh is the first commercial release of a Cal Stewart collection and one sure to please the thousands of his fans.

In the late 19th century, “Uncle Josh” was commonly used as a generic comical name for elderly rural characters. But, despite having appeared in The Old Homestead, in which Denman Thompson played Uncle Joshua Whitcomb, Cal Stewart created a character all his own in Uncle Josh Weathersby. And, like its most famous citizen, the town of Punkin (or “Pumpkin”) Center grew a personality gradually over time. By sequencing the tracks on this CD in the order in which Stewart originally unveiled them in his act, we are allowing modern audiences to get to know both the man and the town much the same way audiences of a hundred and more years ago would have.

Representing the Early Years of the Act

We begin with Uncle Josh’s theme song, “I’m Old, but I’m Awfully Tough,” before launching into the earliest of all, “Uncle Josh’s Arrival in New York,” which entered the act in 1897. Here it is in its late 4-minute U-S Everlasting form, from about 1912, perhaps the most developed it would ever be. Then begin the Indestructibles in earnest, with several numbers from 1897 and 1898, finding Josh at a base ball game battered by a billygoat, on a street car “rubbernecking” at a small child, on a trip to Coney Island witnessing the dance of Salome, at a department store getting “buncoed” (for the first of many times), inviting the city folk down to the farm to see the weird actions of the livestock, and on a bicycle spending more time under the wheels than on top of them.

Most of the material Cal Stewart chose to perform for his Indestructibles had already stood the test of time for a decade or more, and he recorded the majority of them for all the companies that sought his services. The routines developed between 1899 and 1901 find Uncle Josh much in need of adult supervision. He parodies a sermon when the camp meeting comes to Punkin Center; he makes a citizen’s arrest of the fire chief when he unwittingly calls the fire deartment to answer a false alarm; he learns how cold ice cream is when he gets hooked up with society folks; he ends up in a tussle with a “heathen critter” as he tries to claim his wash at a Chinese laundry; he gets buncoed again by the lightning rod agent; and he gives a traditional telling of a story in “Jim Lawson’s Horse Trade,” as Uncle Josh is not himself the subject of the story. But he’s back to his mischief when he plays a game of golf, as Aunt Nancy loses her glass eye to his bad swing.

The years 1902 to 1904 find Stewart developing the act to include other actors, implied and present, and other ethnic groups. “Last Day of School at Pumpkin Center” has Uncle Josh imitating the children putting on a talent show to hilarious effect, while his visit with Aunt Nancy to New York hints at a relationship brewing. That would come to full flower in the courtship between Josh and Nancy, in which we meet the real Aunt Nancy (played by the real Mrs. Cal Stewart) on another 4-minute U-S Everlasting cylinder. They laugh, they tell stories, and they sing together. About the same time this act entered the routine, so did “Uncle Josh and the Insurance Company,” which sounds aurally like the Three Stooges look visually. It’s a routine that was added to the National Recording Registry in 2006.

The final eleven selections entered Stewart’s repertoire between 1906 and 1909, except the last, which was from 1911. We find that Uncle Josh’s New Year’s pledge to refrain from swearing proved unsuccessful, that some of his neighbors don’t know what a ground hog is, that roller skating is not the kind of skating Josh is used to, that he’s visiting New York a second time to get bridge-engineering tips, and that staying at the house of Jim Lawson’s friend, Bug, has rendered him unfit to serve on a jury. Domesticity rules in the final numbers on this CD, but Josh is just as much at danger as abroad. He finds himself assaulted by a revolving door at the post office when he gets a letter from home, spooked by a photographer at the nearby gallery, taken advantage of by his employee-sailor’s “whoppers,” pestered by Cindy Lawson’s boy as he attempts in vain to keep house, and abandoned on account of Prohibition by Punkin Center citizens on a simultaneous moving-out day. The set ends with a 4-minute cylinder featuring the song “Three Little Owls and the Naughty Little Mice” and a reprise of “I’m Old, but I’m Awfully Tough.”