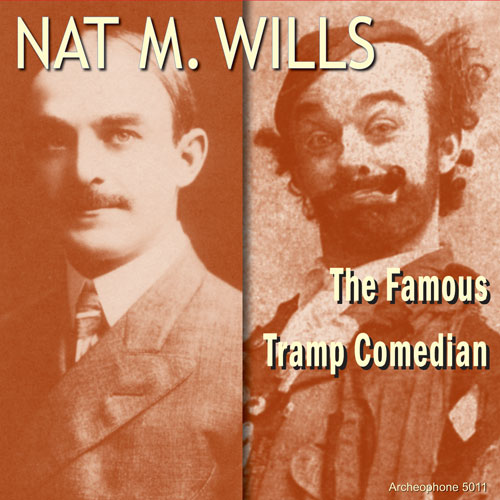 26 tracks and a thoroughly entertaining 24-page booklet featuring a new biographical sketch by vaudeville historian Trav S.D. Although he was popular on stage for more than two decades, playing the scruffy but urbane tramp, Wills' recorded output totaled only 26 distinct titles, and they are all here, compiled for the first time ever and sounding like they were recorded yesterday. List price: $16.49

W. C. Fields, Charlie Chaplin, Red Skelton . . . All were so-called tramp comedians, but one of the most famous of all vaudeville tramps at the beginning of the 20th century was Nat Wills. He appeared on stage with a toothless grin, scruffy face, rough clothes, and oversized shoes, but he spoke like a gentleman and delighted audiences with his topical humor and observations on modern life. Released in 1909, his monologue, “No News, or What Killed the Dog”—featuring the timeless comic trick of spilling piecemeal lots of bad news under the pretense that there is nothing to report—took off like a wildfire and became one of the early recording industry’s all-time biggest smash hits.

A Vaudeville Classic in the Art of Parodying

Nat M. Wills had already been a staple on the variety stage for over a decade when he made his first recordings. Victor introduced him in 1909, saying, “No entertainer on the American stage to-day is more popular with the public than Nat Wills. His familiar impersonation of a tramp is unique and always amusing, without a touch of offensiveness or vulgarity, and his stories and monologues are witty and laugh-compelling.” Listeners today may take issue with the “offensiveness” part, especially after hearing “Two Negro Stories,” but if the standard against which he was being judged was the material on Actionable Offenses, then indeed Wills succeeds with flying colors. Wills’ forte was clever parodies of popular songs, and he excels especially when sending up sentimental favorites, such as “Old Oaken Bucket” and “Just Tell Them that You Saw Me” (on “Saving Up Coupons for Mother”). You’ll howl when you hear what The Happy Tramp does to “Are You Sincere?” and “The Stars and Stripes Forever.”

Wills was no one-trick pony. As on “No News,” he showed that he was a master at comic timing. His stories about his fictional (and ample) girlfriend Hortense proved to be popular, as on “Hortense at the Skating Rink” and “Hortense at Sea.” Wills saves his best stuff, however, for his topical recordings, such as “Reformed Love (and a Few Other Subjects)” (it’s still funny today!), with its jokes about germs and antiseptics. “Too Much Dog” and “A Father of 36” are also straight-out monologues that give us insightful and sometimes contradictory glimpses into the private fictional life of the famous tramp comedian.

Graduating to the Follies and then to Emerson

After an intense period of recording, from October 1908 until April 1909, which culminated in several Edison recordings (such as “Parody on ‘Down in Jungle Town'”), Wills hit the road nonstop and didn’t return to the studio until 1913. The occasion? Wills was headlining in Ziegfeld’s Follies, where he brought down the house with “New York, What’s the Matter with You?” and “If a Table at Rector’s Could Talk.” Together they made an outstanding double-sided disc feature released in December 1913. He then laid off another two years, coming back in 1915 with “Automobile Parody” and a few other specialties. In 1917, when Emerson began issuing its 7-inch records, Wills was one of the label’s earliest stars, recording “To Europe on a Cattle Boat” and “War Stories.”

Nat Wills recorded several of his routines for more than one record company. Sometimes the versions are similar, but in some cases he reworked the material and condensed or expanded it, depending on the needs of the company he was working for. Fortunately, one specimen of every routine Wills recorded (26 total) fits onto one CD, and you have them all on The Famous Tramp Comedian.

Nat Wills’ origins have always been murky, and while some questions still remain, new ground has been broken by noted vaudeville scholar Trav S.D., author of No Applause—Just Throw Money: The Book That Made Vaudeville Famous. We’ve untangled some of the conflicting stories about Louis Magrath “Nat” Wills’ early years by presenting his side of the story alongside what has been gleaned from census data. Also included in the highly entertaining booklet is a transcript of Wills’ earliest-known sheet music (from 1893), “He Disappeared from View,” which he co-wrote, along with jokes and illustrations from Son of Rest, an extremely rare joke book penned by Wills. Nat Wills left the world too early, the victim of accidental carbon monoxide poisoning in 1917—but his legacy lives on at Archeophone Records!