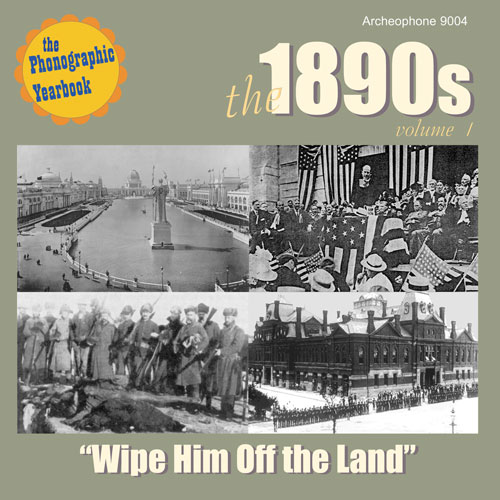 30 tracks from 1893-1902, transferred from exceedingly scarce Berliner discs and brown wax cylinders, with top artists such as Dan W. Quinn ("The Band Played On"), George J. Gaskin ("Drill, Ye Terriers, Drill"), John Yorke AtLee ("The Mocking Bird"), George W. Johnson ("The Whistling Coon"), Arthur Collins ("I'd Leave My Happy Home for You"), and Sousa's Band, Vess Ossman, Edward M. Favor, Russell Hunting, and more. The deluxe 24-page booklet boasts extremely rare photos of several of the artists (many only now published for the first time in over 100 years), artist bios, a timeline of when the songs first hit big, and an historical essay focusing on major social problems of the decade. Companion volume to ARCH 9006. List price: $17.49

Whistling solos, comic monologues, and “coon songs”: these are the popular records of over 100 years ago, routines that remind us that the early talking machine was a novelty entertainment. The records—whether soft, non-durable brown wax cylinders or fragile shellac discs—were disposable curiosities that have accidentally survived the ravages of time to become crude
testimonies to history two centuries ago.

An odd kind of popularity

There are no “original” hits by original artists on records of the 1890s. Hit songs were the ones selling the most sheet music or those coming out of Broadway. In the fledgling recording industry, numerous versions of the songs appeared on commercial records. Over time, though, the reputations of certain artists, such as Dan W. Quinn, Len Spencer, George Gaskin, J. W. Myers, and Steve Porter, assured quality. These were the big “stars” of earliest days of recording.

A living testament to history

Many of the artists featured on the 1890s CD were born before the Civil War. In fact, recording phenom George W. Johnson was born a slave on a Virginia plantation. These are the voices of a history that usually seems beyond reach. But listen as Russell Hunting, in “Casey as Doctor,” makes a joke about newly-inaugurated President McKinley. Or hear Sousa’s Band play their director’s “latest” march, “El Capitan.” The booklet includes information on each of the artists featured to help bring these pioneers to life.

All the rough edges

The accompanying essay does not attempt a complete cultural history of the decade but, instead, focuses on a few key events that illuminate the songs, the marches, and comedy routines. Additionally, you’ll be able to read some of the song lyrics; like many of the contemporary events, not all the songs are pretty. And not all the records have the clear sound of modern CD music. While we have attempted to minimize the noise on these rare records, the fact is that they are worn and noisier than most of the records Archeophone reissues.