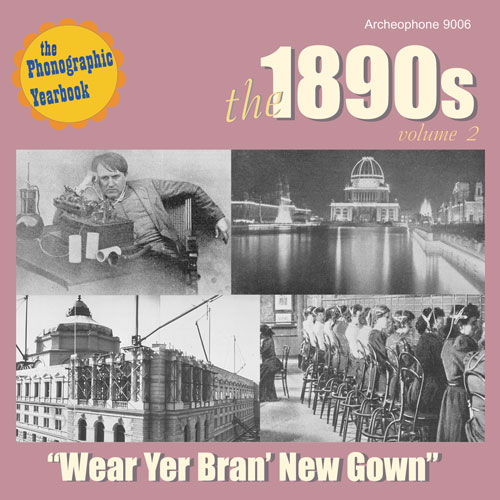 30 tracks from 1892-1900, transferred from exceedingly scarce brown wax cylinders and Berliner discs. More hits by the biggest artists of the American 1890s, such as Gilmore's Band, Cal Stewart, Dan Quinn, George Gaskin, Arthur Collins, and John Yorke AtLee. Standout tracks include the hitherto unattested cylinder of "Silver Threads Among the Gold" by J. W. Myers, the 1894 recording of "Then You'll Remember Me" by the U.S. Marine Band, an exceptional copy of "Casey at the Telephone," ca. 1896 by Russell Hunting, and the ultra-rare "Daddy Wouldn't Buy Me a Bow Wow" ca. 1892 by Silas Leachman for the North American Phonograph Company of Chicago. The deluxe 24-page booklet includes lyrics and bios and pictures of selected songwriters, a timeline of when the songs first hit big, and an historical essay focusing on major technological innovations of the decade. Companion volume to ARCH 9004.  List price: $17.49

People are getting excited about scratchy records from two centuries ago! Music collectors and historians have taken a strong liking to our 1890s, Vol. 1, so we’re back with our second volume of tracks from the American 1890s. In two CDs, with 60 selections and two extensive booklets, Archeophone chronicles the popular music and some of the most notable events of the decade known as “The Gay ’90s.”

Here are another 30 songs, marches, whistling solos, banjo and xylophone solos, and comic routines, all from the decade when popular music was first born as a commercial product. With over 70 minutes of sound and a 24-page booklet, this is a real value for the scholar and casual listener alike.

The names of the performers are remote to many listeners, but the songs are part of the fabric of America’s national identity: “Hello, Ma Baby” (a song about telephones and ragtime), “A Hot Time in the Old Town” (which became the unofficial anthem of the Spanish-American War), and “The Stars and Stripes Forever” (Sousa’s best-known march). There’s also the perennial “Silver Threads Among the Gold,” the Civil War-era “”Tenting on the Old Camp Ground,” and “The Liberty Bell,” the Sousa march known to many modern listeners as the theme song to Monty Python’s Flying Circus. Surprise yourself by just how many of these songs you—or your parents—or your grandparents—know.

With songs like “She’s More to Be Pitied than Censured,” “She Was Happy Till She Met You,” “She May Have Seen Better Days,” and “Just Tell Them That You Saw Me,” the public learned about women caught up in a changing society. Either they left the safety of their families, moved to the dangerous city, and fell in with bad company, or they married badly and took the unthinkable step of leaving their husbands. These mournful stories try to elicit a sympathetic tear from their listeners. Perhaps most pathetic of all is “A Picture No Artist Can Paint,” in which an elderly couple experiences a double loss: first, of the daughter who leaves in a fit of anger, and second, of the son who goes to find her!

A Time of Inventiveness

From the light bulb to the telephone to, of course, the phonograph, the 1890s saw the march of technical progress. See how technology both affected the themes of many songs and stimulated the production of the first commercial records in our extensive notes on the times, the people, and the performers of the ’90s.

Could You Please Say that Again?

Customers thanked us for including lyrics in our booklet to The 1890s, Vol. 1, so we’ve put even more lyrics in the booklet to this second volume. Moreover, we give brief biographical sketches to some of the key composers represented in this collection. This CD and notes is a package you can’t do without!