The Complete Hit of the Week Recordings, Volume 2
Various Artists

The Complete Hit of the Week Recordings, Volume 2 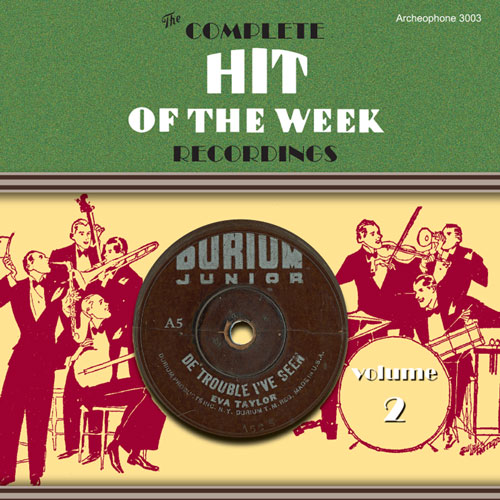 Now available: the second two-CD volume in an eventual four-volume series collecting the complete weekly output of the Hit of the Week franchise, along with rare test and promotional records from the parent Durium Corporation. Hit of the Week records, made with the patented Durium formula on top of a cardboard surface, were the cheapest and best-selling records at the outset of the Great Depression. This second collection picks up where Volume 1 left off, in late 1930, and continues through mid-1931.

These were some of the best-loved and most popular issues of Hit of the Week. The songs are still performed today, and the top musicians who made them hits are still well-known artists. There’s “Three Little Words,” “Moonlight on the Colorado,” and “Out of Nowhere.” The crack musicians include the likes of Ted Fio Rito, Eddie Lang, and Harry Reser. Additionally–and you don’t want to miss these–we’ve got a couple of ultra-rare test records and all five of the A-series Durium Juniors released ca. 1931. These are exclusive Archeophone releases, brought to you once again in collaboration with producer and engineer Doug Benson and Hit of the Week expert Hans Koert.

If anything, the great sound that the Hit of the Week folks bragged about in the company’s infancy got even better in the fall of 1930. Doug Benson has found the cleanest copies of these issues and brings them to stunning new life. Those of you who have some of these records won’t believe how good they sound on this collection. Just listen for example to “Somewhere in Old Wyoming” by the Hit of the Week Orchestra or Vincent Lopez’s “Cheerful Little Earful.”

Great sound is also the hallmark of the two seriously rare test records on this CD. The first is a five-minute microgroove test with two complete songs connected by a musical bridge, “Three Little Words/Moonlight on the Colorado.” It is uncertain who performed this, but it was the way of the Durium company’s future, as they would unveil their five-minute Hit of the Week records later in 1931. Even more mysterious is an apparently live recording of a pianist named Leola Felton playing a scorching stride version of “St. Louis Blues” at Harlem’s legendary Connie’s Inn. The original disc is blank except for a number etched in; thank goodness the announcer tells us that it is indeed a Durium record and that Ms. Felton is the artist, or this top-notch performance might have escaped notice and reissue.

Roughly sometime in 1931, the makers of Hit of the Week launched their promotional Durium Juniors. These were tiny records–only four inches in diameter, with playing time of about a minute and a half–and they sold for a nickel. The songs featured were not hits of the moment like on the regular issues but, rather, old-time classics (Durium could hardly afford royalties on a five-cent record). The entire five discs making up the initial A-series of Durium Juniors are here. The first four are by Frank Luther solo (disguised as Cal Carson) or with Carson Robison (as Gid Carson). Luther performs “Why Did I Get Married” and “She Sat in Her Parlor.” The duo do “Birmingham Jail” and “Lonesome Road.” These are priceless inclusions on the CD.

Eva Taylor Record Thought to Be a Myth

But the rarest and most special of all is A5 in the first Durium Junior series, “De Trouble I’ve Seen” by Eva Taylor. This record was thought merely to be a rumor, and Hans Koert was considering dropping it from his definitive discography. In fact, your friends here at Archeophone were nearly ready to go to press with this CD when the Taylor record surfaced–practically broken in half–and now here it is for all to enjoy. This is Taylor toward the end of her spectacular career doing a moving version of the old spiritual. It’s a significant chapter in her story, now rescued for the public on this Complete Hit of the Week Volume 2 compilation.

Just as Phil Spitalny was the go-to guy on a good chunk of the sides on Hit of the Week Volume 1, so Sam Lanin is the man in charge on most of the tracks here. His bands featured here included a who’s who of the 1930s music world: Mannie Klein, Tommy Dorsey, Scrappy Lambert, Eddie Lang, Bunny Berigan and Dick Robertson. Hear them on “Whistling in the Dark,” “Ninety-Nine Out of a Hundred,” and “Ho-Hum.” And, just for the record, those of you who have HOW 1132, “When Your Hair Has Turned to Silver,” ascribed to Phil Spitalny’s Music, take note: it’s actually Sam Lanin’s Orchestra performing on this track!

As on Hit of the Week Volume 1, the Hit of the Week Orchestra, filled with top musicians, performs many of the selections here, such as “If I Could Be with You One Hour To-Night” and “The Little Things in Life.” For a house band, this is one heck of a collection of musicians. Vincent Lopez is here again, as is Don Voorhees, with “I’m Thru with Love” and “Roll on, Mississippi, Roll on.” And especially tasty are the sides by Harry Reser’s outfits, doing “You’re Driving Me Crazy,” “When I Take My Sugar to Tea,” and more.

As always with Archeophone releases, the booklet alone is worth the price of admission. Hans Koert tells the story of the Durium Corporation, and Doug Benson gives a fascinating overview of the records and artists. Hit of the Week Volume 2 is another unqualified smash success!

Categories:Catalogue
Share via
The Complete Hit of the Week Recordings, Volume 2
https://www.archeophone.com/catalogue/the-complete-hit-of-the-week-volume-2/